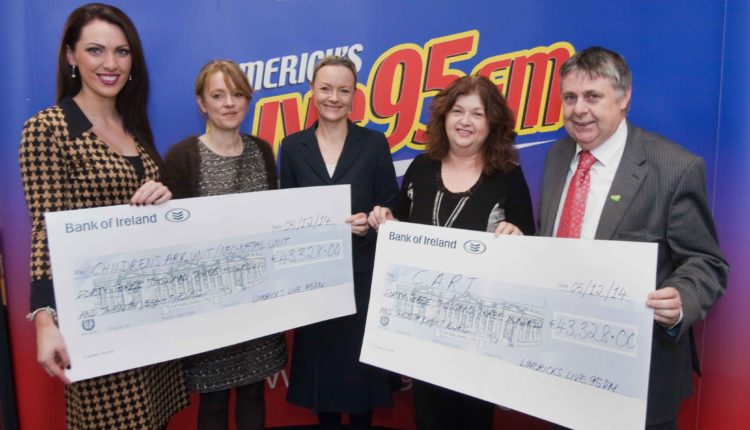 Limerick’s Live95FM has announced that their annual ’95 Stop Tour’ charity fundraiser has been hugely successful, raising  over €86,000 for Limerick kids in need.

The station’s team embarked on a ‘95 Stop Tour’ of Limerick city and county in September visiting communities and organisations who helped to raise money for their chosen charities with events ranging from Coffee Mornings, Fun Cycles, Bingo Nights and Skipathons, all in aid of the ‘95 Stop Tour’ for Limerick Kids.

The “Limerick Today with Joe Nash” show broadcast live from five locations throughout the week of the Tour, visiting Adare, Kilfinane, Abbeyfeale, Castleconnell, and celebrated the final day in the city centre.

This is the fourth year that Limerick’s Live 95FM has raised money for the Children’s Ark Unit at the University Hospital Limerick – with the Neo-Natal Unit also benefiting this year – as well as CARI Limerick, bringing the total raised to over €320,000.

Co-ordinator of the fundraiser, Suzanne O’Brien said: “Limerick’s Live 95FM are delighted to be involved with these two fantastic charities and to have helped in raising vital funds again this year. We are overwhelmed by the support from the people of Limerick and would like to thank them again for their enormous generosity. We simply would not have been able to raise this amount of money without them”.

CARI Limerick provide a professional, child centred therapy and counselling service to children, families, and groups who have been affected by child sexual abuse.  Mary Madden, Community Employment Supervisor with CARI Limerick said that the service wouldn’t exist in Limerick without the support of ’95 Stop Tour’ each year, adding: “Live 95FM’s ‘95 Stop Tour’ is our biggest fundraiser and it has literally kept our doors open for us and helped us to continue to provide the much needed services for the affected children and families. Live 95FM has also raised awareness as it has broadcast our message into many homes, and it has helped some of the “silent families” out there take those first tentative steps in seeking help.”

The Children’s Ark Unit have been able to purchase valuable critical care equipment to provide appropriate care to children in the Mid-West thans to the fundraiser. Dr. Roy Philip, the unit’s Clinical Director said: “Thanks to previous Live 95FM fundraisers we have been able to refurbish the Paediatric Emergency Department waiting area. Having this area means that we can reduce the stress of an encounter with the emergency department for our patients and their families. For the future we will use the funds raised by Live 95FM’s ‘95 Stop Tour’ to invest in many things including new beds for the parents to sleep in overnight.”