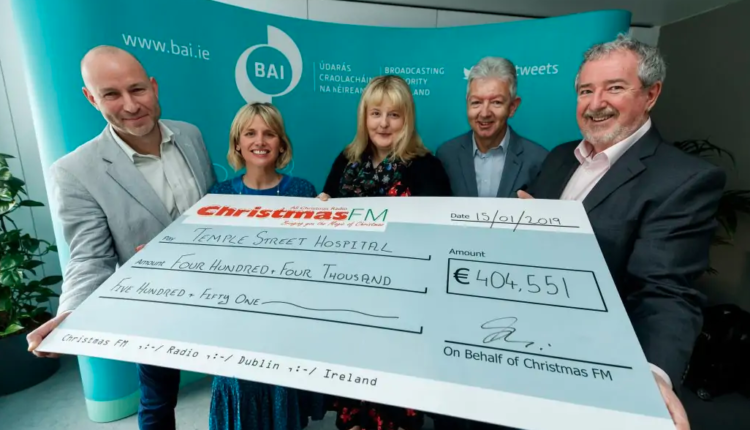 The funds raised will purchase new state-of-the-art lifesaving equipment such as incubators and ventilators – giving the gift of life to over 1,000 critically ill babies and children in Temple Street.

The 2018 fundraising figure brings to almost €2 million, the total amount of funds raised for charities since Christmas FM first came on air in 2008.

Garvan Rigby, co-founder of Christmas FM, says: “We are delighted to have raised over €400,000 with the success of this year’s fundraising campaign. We would like to thank all of our loyal listeners who tuned in and donated so generously to this year’s chosen charity, Temple Street Children’s Hospital and the BAI for granting us the license. We would also like to thank our premier FM sponsors for the year: Cadbury, Coca-Cola, Dunnes Stores, and the Ballsbridge Hotel who have once again provided us with a home for our radio studio. And of course, the station is so grateful to have so many people who aid in making it all happen by helping with the day to day running of the station.”

Denise Fitzgerald, Chief Executive, Temple Street Foundation says: “We are completely overwhelmed by the amount of love and support shown to Temple Street Children’s University Hospital over the course of the Christmas FM campaign. The goodwill and generosity of individuals, families, companies and communities up and down the country is hugely uplifting and will bring real and lasting difference to sick children in our critical care wards. On behalf of all of us here in Temple Street I would like to thank the team in Christmas FM for choosing us to be part of this very special campaign, as well as each and every person who donated to support the hospital over the festive season. On behalf of the staff and families in Temple Street we thank you all and wish you a happy and healthy 2019.”

BAI Chief Executive, Michael O’Keeffe, said: “We are delighted to salute the continued success of Christmas FM and, on behalf of the BAI, I would like to congratulate the team and its listeners for another great result. Radio is hugely popular in Ireland and that fact that Christmas FM raised €404,551 for Temple Street Children’s University Hospital in just 30 days shows the power of radio to bring people together to support a common cause.”

The Broadcasting Authority of Ireland (BAI) grants Christmas FM a 30-day temporary sound broadcasting license, which enables the station to broadcast on a range of frequencies throughout the country.

Christmas FM is funded through sponsorship and run each year by more than 100 volunteers on-air, who devote hundreds of hours of their time. Previous charity partners have included Sightsavers, ISPCC, Barnardos, Simon, Age Action, Aware, Make-A-Wish Ireland and Focus Ireland.

In 2018, Christmas FM was once again sponsored by the premier FM sponsors Cadbury, Dunnes Stores, and for the first time, Coca-Cola. For the sixth year, Christmas FM was broadcast from the Ballsbridge Hotel, Dublin who kindly gave the space for free.