Pirate DAB multiplexes take to the air in Dublin and Cork

Pirate radio stations are appearing on unlicenced DAB digital multiplexes in Dublin and Cork, and more are planned for other cities in Ireland.

The “FreeDAB” platform, now carrying around ten stations, was born out of frustration over the procedures in place to broadcast legally on DAB in Ireland.

During the recent 12-month legal DAB multiplex trial operated by ‘éirdab’ in Cork, a radio station wanting to broadcast via this method would need to pay upfront for a five-year Section 71 licence (a list price of €14,000 (plus VAT)) and wait up to five months for the application to be processed.

But waiting five months for a licence and paying five years up-front to be on a 12-month trial are just two of the issues holding back DAB in Ireland.

Thanks to @ComReg for licensing our DAB trial in Cork. We’ve had a very eventful and interesting year. Such a shame that it had to end and disappointing that our responsible licensed operation has been replaced by ‘pirate’ DAB activity. #sad pic.twitter.com/aHB4PaaVfa

The technology required to broadcast a multiplex is now easier to acquire and is mostly controlled by software whilst costs to broadcast illegally via the multiplexes also appear to be very low.

Access to these new pirate multiplexes is promoted via the FreeDAB website – with prices advertised at less than €100 per month.

Speaking to RadioToday, the operator of FreeDAB said he had tried to gain a Section 71 licence from the BAI to join the eirdab trial but became frustrated by the process. He told us: “The multiplexes operate in accordance with the law in regards to spectral purity and interference.”

The BAI is continuing to renew FM services for periods of up to ten years, with no plan in place to follow other countries such as Norway and Switzerland to switch FM off in favour of a digital future. When contacted by RadioToday, the Broadcasting Authority of Ireland also had no interest in stopping the illegal DAB broadcasters, instead referring the matter to ComReg.

When asked if ComReg was doing anything actively to stop the broadcasts, we received this reply: “ComReg is the licensing authority for the use of the radio spectrum in Ireland. The possession and use of apparatus for wireless telegraphy in Ireland must be authorised by ComReg in accordance with the Wireless Telegraphy Act (as amended). Using the radio spectrum without a licence is a breach of the Wireless Telegraphy Act and is liable to prosecution and, on conviction, fines and confiscation of equipment. ComReg actively monitors such illegal use of spectrum and responds accordingly.”

The future of DAB broadcasting in Ireland is still very unclear, with no plans by any official body to implement the technology beyond the limited service offered by Ireland Mux1 carrying RTÉ services.

The Independent Broadcasters of Ireland don’t yet have a formal position on the future of DAB in Ireland. Most of its members do not offer any services on DAB, although Wireless recently announced DAB is an area it will be investing in going forward. 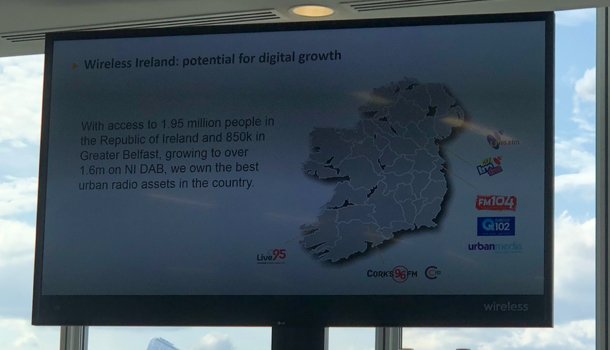 Jo Bucci, COO, Wireless, recently spoke at a digital radio event in London saying that the company is the biggest supporter of digital radio in the UK, as 75% of their operations is via digital platforms. Jo also talked about the potential for digital growth in Northern Ireland and the Republic, without mentioning any specific strategy.

At the #digitalradio event in London today, Jo Bucci, COO, Wireless, takes to the stage welcoming delegates, saying Wireless is the biggest supporter of digital radio in the UK @DigitalRadioUK pic.twitter.com/jgyOstkhvI

In a report to the IBI earlier this year, ‘éirdab’ outlined its experiences of running the trail multiplex in Cork, and the steps required for the industry to adopt a digital future.

The key objectives and benefits of the experiment were to:

The multiplex had its DAB antenna on the CiX tower, providing robust coverage across the city and surrounding countryside, and carried half a dozen services at its peak.

éirdab recommended that the BAI should reconsider the payment schedule for any future DAB-only Section 71 licences, streamline the application process, and for the IBI to put pressure on ComReg to close the illegal DAB operator immediately to avoid audience confusion and future credibility of DAB for listeners.