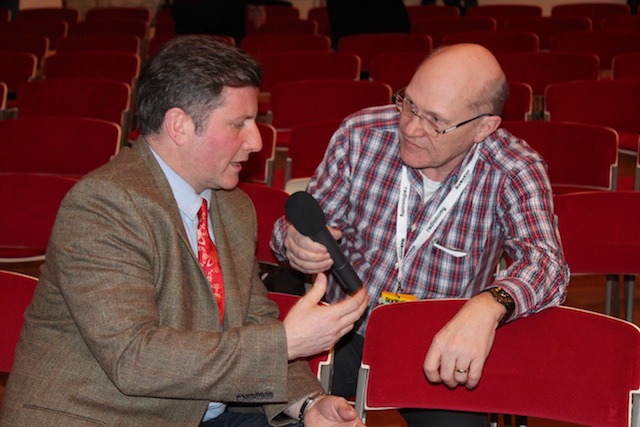 As RadiodaysEurope packs up and heads towards Dublin, we take a good look at the best bits of this year’s event.

Over the last two days there’s been over 50 sessions taking place in four rooms – not everyone got to see what they wanted to see due to up to four sessions taking place at once, but with social media and the organisers own extensive blog, most people could at least find out the headlines from each session.

It started with four radio executives, including the UK’s John Simons from Real and Smooth Radio talking about the future of radio hosted by Paul Robinson, former Head of Strategy at BBC Radio.

Day One was soon broken up into smaller sessions. One of the first topics was multi-platform radio. James O’Brien from ABC Radio suggested that if a station has a great idea, it doesn’t always have to be broadcast on mainstream radio – try it out on the web. At ABC Extra, a pop-up web station in Australia, they are only broadcasting for six months of the year, promoting events and special content.

Multiplatform is also key for Ali Abhary, from Spectrum Media in Turkey. But he warned about saturating audiences with content. Having too much choice is confusing – sometimes you just want to kick back and listen to the radio.

Jan-Willem Brüggenwirth, Director General, Radio 538 in the Netherlands, highlighted the need for digital innovation in radio. He announced that in the Netherlands, the radio industry is embracing DAB+ and will aim to convert from analogue to digital over the next ten year period.

Session host Paul Robinson was less optomistic than Jan-Willem, saying the UK has been at it for much longer than 10 years and we’re still around 20% (of listeners to DAB).

BBC Radio 1 and Radio 1Xtra Controller, Ben Cooper, explained his strategy to reach younger listeners in the UK. He also presented his views on how to measure audiences, not just via official measuring tools, but also using retweets, Youtube views and Facebook posts.

Michael Hill, Managing Director at Radioplayer UK, said that the radio industry was waking up to the power of partnership and announced that Norway is adopting the UK Radioplayer system.

Sam Cavanagh, producer on the Hamish & Andy Show in Australia, said that the future of radio is how you see your audience, importantly, not as “listeners” but rather as “fans”.You might be doing well on the radio, but if you are not online then you will lose out.

Did you know Hamish and Andy only broadcast one drivetime show a week – on a Monday – and pre-rec the 9am to 10am hour for the rest of the week. I found this very interesting, and can’t think of a similar situation in the UK. We tend to put our one-show-per-week personalities on at the weekends only.

Nick Piggott, Chairman of RadioDNS, said that by using hybrid radio, broadcasters could obtain mass market and good reach via terrestrial broadcast technologies, combined with personalisation and interaction delivered through the internet.

I love the idea of Hybrid Radio and just wish there was a law which says every radio built from now on needs to be Hybrid (FM, Digital, IP all in one). That same law should also say Mike Hill’s prototype radio (which I finally saw in person!) should be the basis for everything. Ever. Simple?

And that was just day one.

Two of the highlights of day two was the session with Spotify and the one with NRJ.

NRJ is so similar to the UK’s Capital it’s scary. They even share a similar television advert. I can see why there are rumours of NRJ wanting to take over the Capital network (it would eliminate Global Radio’s problem areas) as the growing network has over 500 transmitters in over a dozen countries all over the world. Except the UK. They want to expand, too.

NRJ France’s listenership has grown by 1 million listeners a year for the past three years.

And Ross Adams, Spotify’s European Sales Director gave a whistle-stop tour through the Spotify product. Adams felt that Spotify were more a friend than a foe to the radio industry and that there were many opportunities to work together.

It wasn’t just about the sessions. Radio companies were there displaying their latest toys and gadgets. From RCS promoting Zetta (it does actually look amazing, and a long way from Master Control) to INRIX promoting travel services. A number of jingle suppliers were there too, including Reelworld, Pure Jingles, Brandy, SOB and Benztown.

One of the services which caught my eye was Vidigo. They are offering visual radio. It’s a webcam on heat. A lot like what 5 live provides online but with balls on. Sales Manager Ranil Kralendonk told me they are talking to may UK stations at the moment so we might see some more stations offering clever streaming webcams soon.

All that together with the social element of putting faces to names and networking resulted in what I concluded was one of the better radio conferences I’ve attended over the last 10 years or so. Hopefully many of the other 1200 delegates came to the same conclusion, and I look forward to the next one in Dublin.

To hear from the delegates, speakers, organisers and more, be sure to listen to the special edition of the Radio Today Programme with Audioboo.