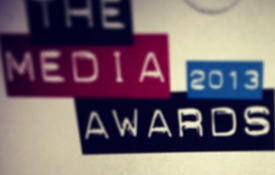 Radio stations have taken home a number of top prizes at this year’s Media Awards, held at the Burlington Hotel, Dublin Thursday night.

Over 250 entries were received by the organisers this year, representing a 20% increase on last year’s figures – and categories cover all media sectors including sales agencies, press, television and of course radio.

The Media Brand of the Year award was won by Spin 1038 ahead of other shortlisted stations 98FM, Today FM and Cool FM. They fought off the likes of the Irish Daily Mail and O2 Media for the trophy.

Best Sales Initiative ROI was won by Today FM for The Big Holiday promotion. They beat Spin 1038 and 98FM who were also shortlisted.

But Sales Team of the Year, in which Today FM, Newstalk 106 – 108 and UTV Radio Solutions were shortlisted for, went to Associated Newspapers Ireland.

Congratulations to all winners and nominees from RadioToday!

Here’s a recap of what happened at last year’s event: