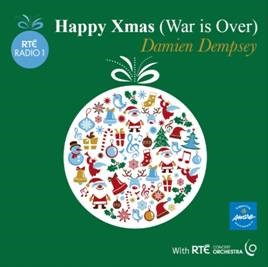 RTÉ today releases the lead single from the album A Murray Christmas 2 – Damien Dempsey’s collaboration with the RTE Concert Orchestra on the John Lennon and Yoko Ono Christmas classic, Happy Xmas (War is Over).

The full proceeds from the sale of the single will be donated to AWARE, a charity which supports people with mental health issues.

Dempsey has been working over the years with people who struggle with mental health problems, and his own original songs often touch on the struggles of life and how to overcome them. In his song Chris and Stevie he writes, “talk to me and tell me how you feel”, which RTÉ say mirrors the message of the charity.

AWARE’s mission is to create a society where people affected by stress, depression, bipolar and mood disorders are understood, supported, free from stigma, and are encouraged to access appropriate therapies.

The single is taken from A Murray Christmas 2, an album that offers listeners an alternative Christmas soundtrack with contributions from many of Ireland’s leading artists such as Lisa Hannigan, The Riptide Movement, Mick Flannery, Cathy Davey, Walking on Cars, Declan O’Rourke, Eimear Quinn, Donal Lunny and friends and of course Damien Dempsey.

John Murray, presenter of The John Murray Show on RTÉ Radio 1, says:  “Dempsey’s take on the Lennon/Ono classic is very refreshing, moving gently and tenderly at the start but ending with the passion and strength that listeners have come to expect from him. Paired with the RTÉ Concert Orchestra and his own band, it is a very uniquely Irish version of Happy Xmas (War is Over).”

Aware says: “The three pillars of Aware’s work are information, education and support.  More than 450,000 people in Ireland experience depression (1 in 10) at any one time but many hide their condition and never get help. Aware’s message is one of hope: recovery is possible. Early intervention as well as ongoing support are very important.”

Happy Xmas (War is Over) was released today exclusively as a digital download on iTunes and RTÉ Shop, and costs just 99c. All proceeds go to Aware.