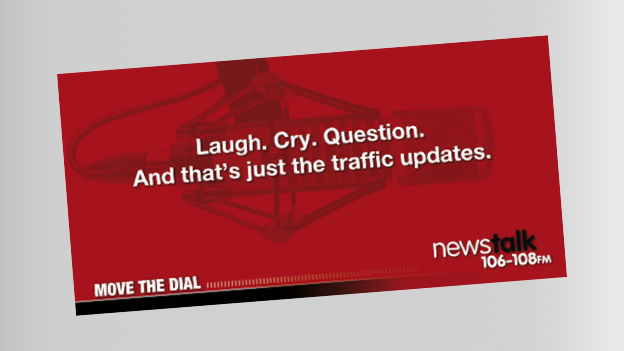 A new advertising campaign by Newstalk includes a television ad specifically created for use on RTÉ Television.

The separate advert comes after the state broadcaster refused to air a campaign last year which included the words “Move the Dial”. Newstalk has since accused RTÉ of being anti-competitive and discriminatory against them because all other television stations in the country agreed to run it.

Commenting on the announcement, Cliona Hayes, Group Marketing Director, Communicorp said: “RTE’s decision not to accept the ad in its original format is motivated by the desire to diminish the effectiveness of Newstalk’s campaign, and to curb the listenership of a competitor. We believe it is an abuse of its monopoly position, and despite numerous attempts at a compromise we have now been left with no other choice than to remove the call to action.

“The ad is part of our overall strategy as a challenger brand and we are continually seeking to recruit new listeners to the station. While waiting for the decision of the CCPC, we can’t forgo talking to our target audience. So we have been forced to modify the ad because to hold it any longer would be detrimental to our overall campaign, and at this stage we just want to move forward with our plans for the station.”

Ms Hayes continued, “ RTÉ is subsidised by the tax payer, and to refuse advertising based on self-drafted guidelines is discriminatory and an obvious attempt to suppress the competition. Commercial stations in Ireland do not receive any funding from the state and therefore RTÉ should not be allowed to abuse its position by refusing to accept revenue from Newstalk and other stations.”

The modified TV ad will be aired on RTÉ for the first time tomorrow night (Friday) at 22:05. The ad is part of the station’s wider advertising campaign, the next installment of which will be revealed this weekend in what will be one of the stations most provocative campaigns to date. The campaign will include six different executions which focus mostly on the Newstalk Breakfast and The Pat Kenny Show.