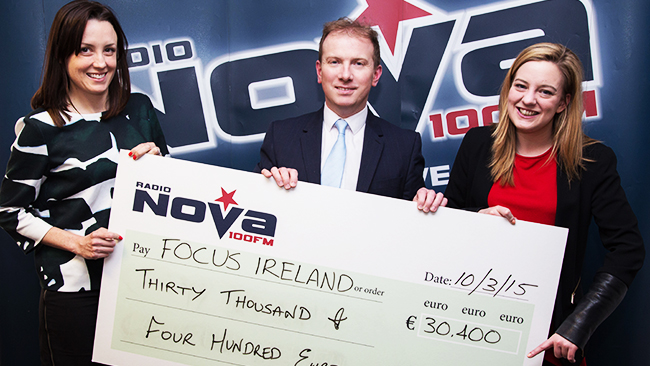 Radio Nova CEO Kevin Branigan has presented a cheque for €30,400 to homeless charity Focus Ireland on behalf of the station and its listeners, following their successful “Help the Homeless Radiothon” last month.

The station aimed to raise €25,000 to help the charity tackle youth homelessness in the Greater Dublin area with the special 2-day event on Wednesday 11th & Thursday 12th February. After beating this target by over 20%, the station presented a cheque for the full fund to Focus Ireland executives last Friday at a ceremony at its HQ in the Dublin Docklands.

Branigan, pictured above presenting the cheque to Rachel Murphy, Focus Ireland’s Public Fundraising Manager alongside Emily Brew, Donor Marketing Officer, told RadioToday: “We’re blown away by the support of our listeners. This was the first ever major event we’ve undertaken of this nature and we were both delighted and humbled by the support and to be able to raise so much money for this vital cause”.

Focus Ireland’s Rachel Murphy said: “The generous support of Radio NOVA’s listeners is now helping us to deliver vital services to help young people in the Greater Dublin area who are homeless or at risk of homelessness, helping us to provide hot meals and a safe place to sleep – and help with moving on from homelessness to the hundreds of people who need our help today”.