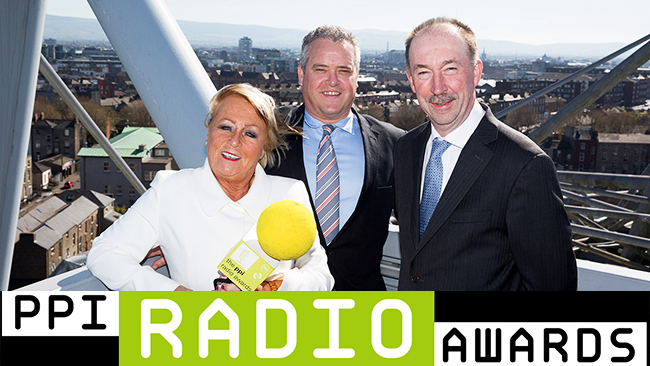 The call has gone out for entries in the 2015 PPI Awards – the Oscars of Irish radio.

The Awards – sponsored by Phonographic Performance Ireland (PPI) and Broadcasting Authority of Ireland (BAI) – will take place on Friday October 9th 2015 at a new venue – the Radisson Blu Hotel, Galway – and they will be attended by the top stars of radio on the island of Ireland, North and South, National and Local.

Following last years Awards, which gained the largest volume of entries, the 2015 Awards are expected to be another great night for the Irish Radio Industry. New for 2015 is the addition of an award for Comedy, recognising the work of those who endeavour to make us laugh.

Winners from the 2014 Awards included:

Speaking about this year’s Awards, Sean Murtagh PPI Committee Chairperson, said “The PPI Radio Awards are going from strength to strength. Last year’s entries reached an all-time high and we are hoping to do even better this year. We are already seeing great interest in the new Comedy programme category and with all the amazing comedy talent on Irish radio at the moment, we expect the standard is going to be off the chart!”

BAI Chief Executive Michael O’Keeffe said: “The BAI is very pleased to support the PPI Radio Awards in 2015. This event allows for the Irish radio sector to recognise the high quality radio content that is produced each day by stations around the country. We wish all the entrants every success.”