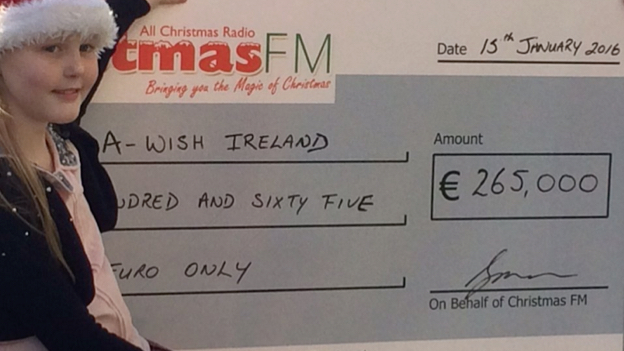 Christmas FM’s 2015 fundraising campaign has raised over a quarter of million Euro for the children’s charity Make-A-Wish Ireland.

Central to the fundraising drive was the Christmas FM annual Donations Day’ which saw listeners donate over €10,000 nearly every hour and over €125,000 raised over the course of the day. All donations raised by Christmas FM and Make-A-Wish will see further children have their lives enriched with hope, strength and joy, allowing them to dream big and forget about their sickness for a moment and cherish their childhood dreams.

Christmas FM is run as a not-for-profit operation with 100% of donations going directly to the charity. Since 2008, Christmas FM has raised over €860,000 for charities including ISPCC, Barnardos, Simon, Focus Ireland, Age Action, Aware and Make-A-Wish Ireland. The station is funded by sponsorship which covers all the costs and is sponsored this year by An Post and Lidl.

The station broadcasts from the Ballsbridge Hotel, Dublin who give the studio space for free. More than 100 volunteers participate across the on-air production and promotion of the station this year, each devoting between 20 and 50 hours of their time.

Garvan Rigby, co-founder of Christmas FM, says: “We are completely blown away by the generosity of our listeners this year with over €265,000 donated over the course of the campaign! This has been by far the most successful campaign on record with double the amount of donations from previous years. We’d like to thank all our loyal listeners for tuning in and donating so generously to this wonderful charity.”

Irene Timmins, Head of Fundraising for Make-A-Wish Ireland says: “Christmas FM is such an exciting and unique initiative so we were delighted to be chosen as the charity for 2015. We could not have anticipated the unbelievable generosity of their listeners and I would like to say a huge thank you to everyone who donated. Their support will transform the lives of so many brave children and replace the sadness and hopelessness, which comes with battling a life-threatening illness, with extraordinary memories and pure joy. Special thanks also to the Christmas FM volunteers who worked tirelessly to ensure the success of the radio station and to our wish families who told their stories so eloquently over the course of the campaign.”

The Broadcasting Authority of Ireland (BAI) grants Christmas FM its annual 30-day temporary sound broadcasting which enables the station to broadcast on a range of frequencies throughout the country.

The BAI’s Chief Executive, Michael O’Keeffe: “Christmas FM is one of the most popular stations in receipt of a temporary licence. It’s a good example of multiple partners working together to deliver engaging radio, while raising vital charity funds. All of the players – and especially the volunteers, donors and sponsors – deserve huge congratulations on their achievements.”