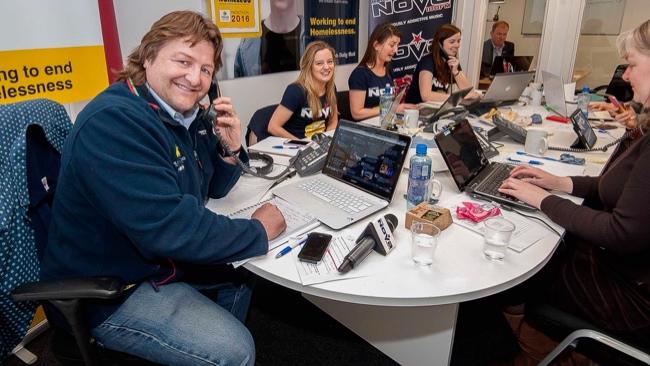 The station raised the money from listener donations over a two-day pledge drive, making enough funds for Focus Ireland to provide more than 4 nights’ safe accommodation and hot meals for almost 1300 people over the coming months.

It is the second year that NOVA has run its Homeless Radiothon, which saw celebrities from across the entertainment, music and political spectrum lend their support live on-air, with actor Cillian Murphy becoming brand ambassador for the initiative.

The Radiothon was presented by NOVA presenters Dee Woods, Marty Miller, Greg Gaughran, Pat Courtenay and Gareth O’ Connor, and was a listener-focussed, fast-moving event, with donations received from people from all walks of life, from children donating their pocket money to businesses donating the takings of their day’s trading.

The station received donations from as far afield as China, The USA and The Netherlands, with Focus Ireland’s team continuously fielding calls in the stations meeting room, which became the Radiothon Call Centre for the two days of the event.

Radio NOVA CEO, Kevin Branigan, said, “It’s a fantastic result. We are humbled by the huge amount of money donated by our listeners as it’s far more than we ever thought possible. The money raised will make a real difference in tackling the social crisis of homelessness and everyone who donated, no matter how small, should be proud of themselves for making a difference”.

Focus Ireland CEO, Ashley Balbirnie said, “We are facing a crisis of homelessness like we have never seen before. Three years ago, may seven to eight families per month were falling into homelessness. Now, it is up to 80 families per month. Radio NOVA’s Radiothon is so important for us on so many levels beyond all the money raised. The energy that NOVA’s team and listeners gave us such a boost; knowing that NOVA and the public are in solidarity with the people we are trying to help is so encouraging”.