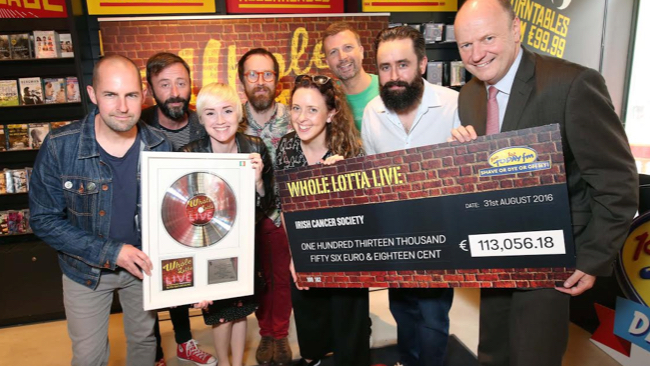 A cheque worth €113,056.18 has been accepted by Mark Mellett of The Irish Cancer Society from Today FM following the success of its charity album release ‘Whole Lotta Live’.

The album of live sessions recorded at Today FM over the years was dedicated to the memory of the late Tony Fenton, and all proceeds went to The Irish Cancer Society via the station’s Shave or Dye campaign. The cheque handover also marked the transition of Shave or Dye campaign to ‘Dare to Care’, Today FM’s new fundraiser in aid of The Irish Cancer Society. Dare to Care will run for the month of September on Today FM.

Today FM’s Pamela Blake, the brainchild behind Whole Lotta Live alongside her husband Gavin Blake, who produced the album, were joined by members of Bell X1 and Ham Sandwich, who both feature on the album, to present the cheque worth €113,056.18.

Pamela Blake: “I’m chuffed that we’ve raised an incredible amount of money through the album for the Irish Cancer Society. Thanks so much to everyone who went out and bought Whole Lotta Live – there’s a lot of love for Tony out there! In memory of the Dude, the money will go towards Melanoma patient support and the Night Nurse and Nurseline services that provide much needed support for cancer patients and their families.”

In November 2015, Today FM announced the release of Whole Lotta Live, a 30-track album compilation of live sessions recorded at the station over the years by Irish and International acts. The sessions, which include recordings from the likes of Hozier, Bell X1, Ellie Goulding, Kodaline, Lisa Hannigan & many more, were collaborated on shows across Ian Dempsey, Anton Savage, Louise Duffy, Colm O’ Sullivan, Paul McLoone and of course the late Tony Fenton.

Since 2010, Today FM’s Shave or Dye campaign has raised over €8 million for The Irish Cancer Society, thanks to the generosity and spirit of the listeners.

Dare to Care will ask presenters and listeners to take on a dare; a challenge that push themselves outside of their comfort zones, something that they have never done it before, and all to support cancer patients, their families, and the hundreds of volunteers who work closely with the Irish Cancer Society.