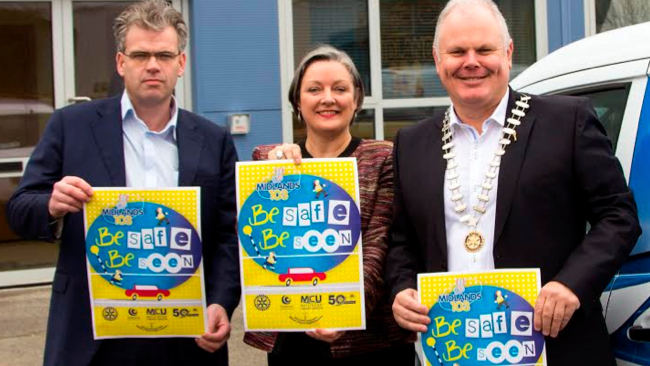 The Minister of State for Health Promotion Marcella Corcoran Kennedy has launched a campaign backed by Midlands 103.

Over 35,000 high visibility, life-saving discs are being distributed to primary schools across the region in a new collaboration involving surgeons, rotary clubs, credit unions and the radio station.

The ‘Be Safe, Be Seen’ campaign also features intense broadcast and online public safety messages, using emotive testimonial from medics with coalface experience of the damage inflicted by road collisions.

“The Road Safety Authority reports that pedestrians on dark rural roads are 13 times more likely to be killed than those walking in daylight,” according to Albert Fitzgerald, Managing Director of Midlands 103 and President of the Tullamore Rotary Club. “We’re urging parents to make sure your child gets the sticker and wears it on these winter evenings.”

Launching the campaign at the Midlands 103 studio last Friday, Marcella Corcoran Kennedy said: “I am really delighted with the opportunity to launch this wonderful campaign.

“We are encouraging everybody to get active and keep fit and it is so important during the winter evenings that people are visible on the roads while walking, running and cycling. These are the most vulnerable road users and the most effective way of protecting themselves is to wear high visibility material and to carry torches.

“This initiative will help to educate and highlight to young people the vital importance of keeping themselves ‘safe’ and ‘seen’ on the road. I would like to take this opportunity to commend Midlands 103, the local surgeons, the local rotary clubs and the local credit unions.”

‘Be Safe, Be Seen’ stickers will be available at local primary schools for the remainder of the year.