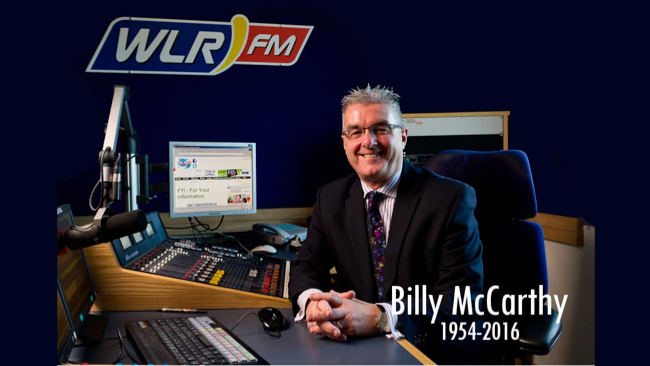 Billy McCarthy has died after a short illness, WLR FM has announced to listeners this morning.

Managing Director Des Whelan says: “Billy was a much loved friend and colleague of all of us here at WLR FM. His untimely death is a huge loss not just to our listeners but to all of us who had the fortune to work with him for many years”.

Billy McCarthy first presented “The Good News Programme” on Saturday mornings on the then WLR pirate station from 1983 to 1988. On obtaining a licence, Billy took over Deise AM from 10am-midday in December 1989. Billy was also Programme Director of WLR from 1989 to 2014.

Since then, the programme has consistently been the most listened to radio show in Waterford for the last 27 years. In 2003, Billy McCarthy won a PPI Radio Award for Best Current Affairs Programme; this was a fitting tribute to all that he had achieved during an impressive broadcasting career that has been cut short far too soon.

Billy McCarthy was ranked among the top Current Affairs presenters in the country.

Des Whelan added: “Billy and I first met when we were teenagers, even at that young age he was always listening to music and practising how to be a radio presenter. He was very proud to have the opportunity to be a part of RTE’s schedule when the national station’s community service first started broadcasting in Waterford in the 1970’s. Billy’s friends and colleagues at WLR FM and everyone at the Broadcast Centre are all shocked & deeply saddened by his passing and extend their sincere sympathies to his partner Des O’Keeffe, his mother Kay, his sister Celine, brothers Declan and Ronan and his extended family, relatives and many friends. To his listenership, for whom to many, Billy was an integral part of their daily lives”.

Programme Director Michael Byrne who worked closely with Billy said: “This is a huge loss for his partner Des, his family and all his friends at the station; he was a brilliant colleague and an even better friend”. He had great passion for radio, he loved Waterford and most of all loved broadcasting to Waterford and beyond every morning. I’ll miss him very much.”

A special programme to remember Billy McCarthy will be broadcast on WLR FM on Monday Nov 21st from 10am.

Tributes have also been paid by the team at Beat – which shares the Broadcast Centre with WLR FM. CEO of Beat Gabrielle Cummins has extended her sympathy to his loved ones: “On behalf of everyone at Beat, we extend our sincere sympathy to his partner Des, his mum Kay, sister Celine, brothers Declan and Ronan and his many extended relatives and friends.

“We are all in shock at the Broadcast Centre. Billy was a mentor to many of us and happily shared his vast expertise with all of us at Beat when we were starting out in 2003. He loved the excitement of getting to know lots of new young radio talent. He is a huge loss not just to our sister station WLR FM but to broadcasting in general in Ireland. Our thoughts are also very much with his broadcasting family; Managing Director of WLR FM Des Whelan, Programme Director Michael Byrne, Billy’s producer Jennifer Long and all the team at the station.

“I know there are also thousands of listeners across Waterford and beyond who are absolutely devastated by this news. There was, without doubt, only one Billy McCarthy. RIP.”

Beat’s Head of Station Sound Niall Power said: “I’m incredibly saddened at the news. When I returned to my home city of Waterford in 2003 to launch my on-air career in speech broadcasting, Billy showed nothing but support and friendship. The ultimate professional who could show incredible empathy with listeners and five minutes later tear a Government minister apart; Billy has done Waterford City and County some incredible service.”

John Purcell, Chairman of the Independent Broadcasters of Ireland has also issued a statement on the death of WLR FM’s Billy McCarthy. It reads:

“The news that Billy McCarthy has passed away will be greeted with great shock and enormous sadness by his colleagues in the radio industry the length and breadth of the country.

“Billy was a trailblazer in Irish radio broadcasting, on air from the very start of the industry in the 1980’s. From that time forward he was considered one of the best broadcasters in the country, a reputation that he maintained right up until his untimely death and which was reflected in his continued popularity with the listening public in his beloved Waterford.

“As well as being a great broadcaster Billy was enormously well liked and respected not only by his listeners but also by his colleagues in the radio industry. His passing leaves a gap in Irish radio and also in the lives of so many people.

“On behalf of everyone involved in independent radio in Ireland I want to express our heartfelt condolences to Billy’s family and his partner Des O’Keeffe; Des Whelan and all the team in WLR FM, all his colleagues in the Broadcast Centre in Waterford, his countless listeners and friends throughout Waterford who will miss Billy’s voice from the airwaves and who will have so great many memories of him over the years.

Also today, all in the South East Branch of the National Union of Journalists extend their condolences. “Billy was a fine broadcaster and a consummate professional. For 27 years his Déise AM programme has set the news agenda in Waterford. All of our Waterford-based members have had the pleasure of working with Billy at some point during their careers.

“Our sincerest sympathies to his partner Des O’Keeffe, his mother Kay, sister Celine, brothers Declan and Ronan and his extended family. Our thoughts today are with our friends and colleagues in WLRfm. Ar dheis Dé go raibh a anam.”

Comments are open, feel free to add your memories below.