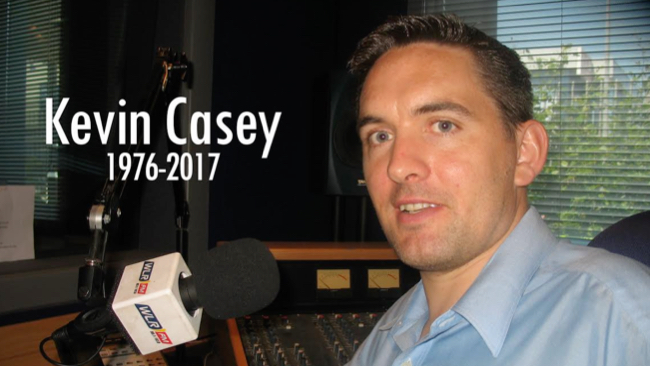 Kevin Casey, Sports Editor at WLR FM has died at the age of 40 after a short illness.

Kevin has been honoured many times for his work in sport with WLR FM, winning a GAA MacNamee award in 2010 for his programme which celebrated the jubilee of Waterford’s All Ireland win in 1959.

Last year he won another MacNamee award for his interview with Waterford hurler Maurice Shanahan where he gave an open and honest account of his struggle with depression which made for compelling listening. The programme was enhanced by the compassionate and sensitive style of Kevin’s interviewing. Last October he won a PPI National Radio Award for the same programme.

WLR FM Managing Director Des Whelan says “Kevin is one of the most popular people I’ve worked with over the years and a really great broadcaster. His love of sport was only surpassed by his great love for his family. Our condolences to his wife Marguerite, his sons Paul, Mark and James and his parents Paddy and Mary, sisters Marie and Majella and his brother Martin.”

WLR FM Head of News Liz Reddy said “Kevin was not just a brilliant hard working broadcaster but a fantastic friend and colleague to everyone in WLR FM. His wonderful easy going charm brought joy to the News and Sports Department and made everyone he met and interviewed immediately at ease. His contribution to the Sports Department was immense, not just in the major awards he won but also in the way he went about his work every day. Kevin has been inspirational in the dignified way he dealt with his illness over the last year.”

His family would like to thank his medical team, Dr. Paula Colvert, Dr. Emmett Wall and Dr. Sean Hogan and are particularly grateful to the oncology unit, oncology liaison nurses and home care team.

WLR FM Programme Director Michael Byrne added: “I am going to miss his friendship and Monday analysis of the weekend sporting action. He was so good at what he did and so passionate about sport. He loved his job and we all loved him. Our thoughts today are with his wife Marguerite and sons Paul, Mark and James.”

Gabrielle Cummins CEO Beat 102-103, writes this tribute: “On behalf of everyone at Beat 102-103, I wish to extend our deepest sympathies to the family, friends and colleagues of well-known WLR FM Sports broadcaster Kevin Casey. Kevin passed away peacefully on Tuesday January 3rd after finally losing his hard-fought battle with cancer.

“Since just last October, Kevin was a national radio award winner. He deservedly received the industry accolade for a powerfully honest documentary he so sensitively produced about the mental health struggles experienced by renowned Waterford GAA player Maurice Shanahan.

“A happy memory we’ll all treasure is the sheer delight in Kevin’s face, the night of the national awards ceremony, when his name was announced as the winner. Everyone from Beat and WLR immediately jumped to our feet with delight; such is the strong connection between the two stations located at the Broadcast Centre, Ardkeen Waterford.

“In addition to his obvious broadcasting talents, Kevin was also an all-round lovely guy. Kevin’s handsome, devilish smirk will be sorely missed by us all at the Broadcast Centre.

“Our thoughts are with his Wife Marguerite, children Paul, Mark and James, Kevin’s mum, dad, siblings and many extended relatives and friends. Our thoughts are also with everyone at WLR FM who are still grieving the recent loss of their WLR FM stalwart, Deise AM presenter Billy McCarthy. To lose one colleague is heart breaking but to lose two so close together is exceptionally difficult. Ar Dheis de go raibh a anam”.