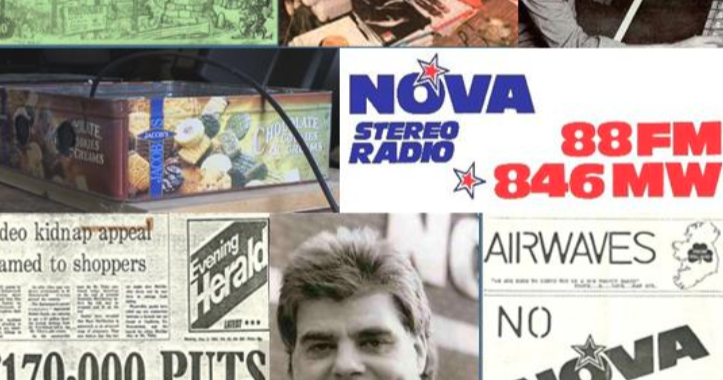 The free event, starting on Thursday May 10th 2018 at 6.30pm, is taking place at the South Dublin County Library in Tallaght to commemorate the 30th anniversary of the introduction of 1988 Wireless Telegraphy Act which closed the vast majority of the popular pirate radio stations across Ireland on air at that time.

Pirate radio has produced many of today’s most popular broadcasters including Bryan Dobson, Mark Cagney, Ray D’Arcy, Dave Fanning and Trevor Welsh. A group of enthusiastic volunteers and anoraks have gathered a large collection of memorabilia which after the Tallaght exhibition will tour across the country with local pirate radio memorabilia on display.

The memorabilia will include car stickers, mugs, rate cards, QSL cards, photographs, a Nova/Puma 10K medal, magazines, newspaper clippings and audio excerpts from stations including Radio Nova, Sunshine Radio and ERI. Throughout the month there will also be a series of lectures on various aspects of Irish pirate radio history.

Entry to the exhibition is free of charge.

An organiser said: “Pirate radio has a unique place in Irish social and broadcasting history since the world’s first pirate radio station took to the air during the 1916 Easter Rising.

“Our ultimate goal is to create a permanent exhibition/museum and archive to save this unique part of Irish social history from loss and to provide an educational outlet for the students of the future to study this period of Irish broadcasting history.”