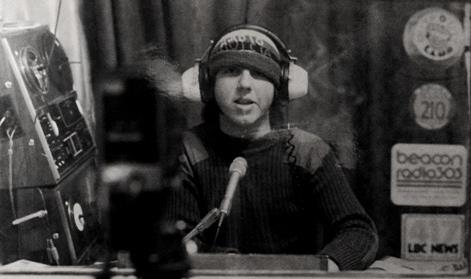 Steve Marshall is an Irish Radio Veteran. If he wasn’t on pirate radio ships he was on a mountain site with a transmitter.

Dave Miller caught up with Steve to ask… How has Irish radio moved forward, has it evolved into a hive of creativity or can a man with so much heritage offer some wise words of wisdom to the Irish radio industry?

Steve can you explain how you caught the radio bug and where it all started?

My grandfather was a drama producer on the original Radio Eireann, and my father also did work for Radio Eireann and the BBC. So I suppose radio is in the blood as it were. I have always been a radio listener, I got a copy of 10 years of Offshore Radio, it was an LP which was issued back in the mid 70s, full of recordings of the offshore radio stations around Britain’s coast in the 1960s. Some great radio, esp Swinging Radio England which was light years of what was happening on the BBC Light programme. The first radio station I was involved with was Radio Invicta 92.4fm, Europe’s first soul station. I learned a lot about radio and what a team of like-minded people can do.

What is It about pirate radio compared to legal radio that you love?

I was involved with many of the stations in Dublin, Cork and Galway and Northern Ireland back in the day. Working with some legendary broadcasters and techie people. Great experience and fun too. Pirate radio has always innovated, the rest just copy. Pirate radio is basically commercial radio without a licence, it can also move format very quickly, something most legal stations cannot. I am also lucky to have worked with some great people over the years. Tony Allan, Don Allen, Don Stevens, Yorkie and many others. I suppose pirate radio changes things for the better whatever the format.

Are the legal stations in Ireland still scared of pirate radio in terms of competition?

Radio in Ireland is very safe, and doesn’t really reflect the people from all over the world who now live here. Certainly over the last few years there have been some brilliant alternative stations, Soul City in Dublin being a class act along with many others. Much of Irish radio hasn’t changed since the late 1980s, I call it “Mary needs a new hip radio” Long speech sections, like a audio version of a local newspaper, and who reads a local newspaper nowadays? Yes legal stations tend to be scared of something new and exciting. It still amazes me in 2018 that Ireland doesn’t have a legal dance music radio station.

What was it like working on The Voice of Peace ship in Israel and how did that adventure landed on your lap?

The Voice Of Peace experience was amazing, I phoned up the office one day only to be told when can you fly out. Two days later I was on a plane to Tel Aviv. The ship was still in dock, so I and others helped paint the ship including Yorkie, Tony Mandell and John Bennett. I also worked with Kas Collins, Johnny Lewis, Stevie Gordon, Cris St John. Learnt alot about radio, and if you can live with the same 15 people for months on end you can do anything.

It is well documented that you and the late great Keith York worked well together on so many stations. What was he like?

Yorkie was a genius, Dave Heffernan of WKLR once described Yorkie as the McGyver of radio. He could take what most people would see as a pile of junk and make it into a 3kw transmitter. Quite an amazing mind for radio broadcasting, he could basically do anything and everything. We worked together on a variety of stations in Ireland and also in Spain. Keith was the kind of person who would go out of his way to help others, I owe much of my broadcasting career to Yorkie, and do many others.

We also spent alot of time outside work esp in Spain, Sundays were chill days with the papers a few drinks oh and adventures with long walks in the amazing countryside.

Keith was a great mate, we got on well together as people, we respected and liked each other alot. I miss him, and I know I am not the only one.

Do you still listen to lots of radio and what are your favourite stations?

I Like listening to a variety of radio, my current favs are LBC and BBC 1 Xtra. Oh and David Rodigan on a Sunday evening, being a major Reggae fan for years. Plus lots of podcast and net radio.

As a CHR fan what are your thoughts about 2FM?

The 2fm story is interesting, set up to replace the likes of ARD and Big D in Dublin back in the day. After many of the pirates closed down in 1988, RTE 2fm had the market to itself for a number of years. It lost the audience very quickly. Today 2fm is also interesting for a radio station which is supposed to appeal to a young audience, it still has too much speech. The average person who works in a shop, wants to hear their fav tunes with less speech. That’s why Chris Cary’s Nova worked so well back in the day, as did many other radio stations in Ireland. It needs a major clearout, very much like Ana Leddy did at RTE Radio 1.

What has been your favourite station you worked on and why?

That is really a hard question, I always look forward, rather into the past. But, my fav radio station I have worked on is without a doubt Riverside 101. I was kicking my heels in Galway after the stations closed down in 1988.

Then I received a letter from Frankie Mclaughlin who had a new radio station in N.Ireland called Riverside 101. I ended up being Programme Director and Drivetime host. Great fun and an amazing bunch of broadcasters.

We had the whole City listening and all the government offices. Oh and they even listened at the then checkpoints too. I like to think we brought modern radio to the region, and also helped bring a community together. We also had some amazing adventures in broadcasting the thing, including a roadshow live from the Guildhall, no high quality ISDN lines then. We had pride of place, Downtown Radio’s OB unit was somewhere up a side street. Something which didn’t please John Rosbourough too much I think. The Riverside 101 project remains in the minds of many people in the great city where I live now.

It is missing a radio station that appeals to the young, with upfront music, and fun and entertainment. Needs a variety of voices too, radio in Britain is full of Irish voices, but Irish radio isn’t paying back as it were. Most of the people who changed radio on the Island Of Ireland came from outside, took a look and a listen, and brought experience and knowledge in radio and marketing which helped move Irish radio on. Sadly most of those people aren’t around anymore. Certainly most Irish cities should have a variety of music formats, offering real choice and quality.

What’s next for Steve Marshall?

As my old friend Yorkie used to say, forward progression always. A few interesting plans in the pipeline, some radio related some not. Watch this space!