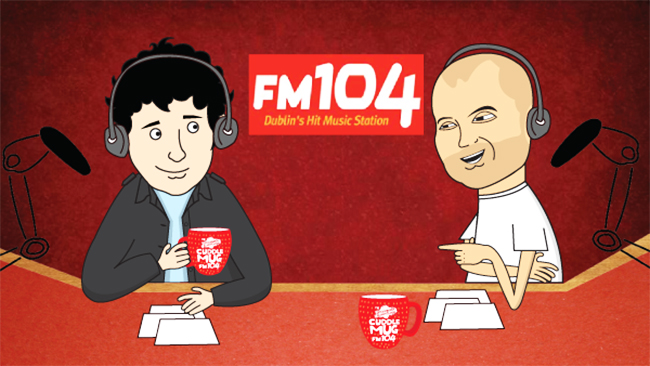 FM104 say they have suspended the Strawberry Alarm Clock presenters Jim-Jim Nugent and Mark “Nobby” Noble for breaking an embargo on announcing details of this summer’s Croke Park gig.

The presenters were taken off air during the 9am news, while Programme Director Dave Kelly spoke to the pair about the incident. At around 20 past 9, Kelly came on air himself instead of Nugent and Noble to confirm that they would be suspended for an unconfirmed period of time for revealing too early that Ed Sheeran would play Croke Park.

Killian O’Sullivan later took over presenting duties on the show, leading into the 10-3 show, which he is also covering this week for Andy Preston.

The station also took to twitter regarding the suspension:

The above tweet has since been deleted by the station.

A press release email from a PR agency acting on behalf of Aiken Promotions which was seen this morning by RadioToday regarding the Ed Sheeran concert on Friday 24th of July makes no mention of an announcement embargo. Along with claims that other stations – including Dublin’s Spin 1038 – revealed the gig details before FM104, this is now fuelling speculation that the station are simply engaging in a ‘PR stunt’.

A number of radio stations including FM104 are now giving away tickets for the Ed Sheeran concert, which go on general sale next Thursday morning, February 26th, at 9am.

[UPDATE]: The station have since posted the following explanation on their facebook page, insisting that there was an embargo in place and that the presenters are yet to face disciplinary action. However, they also confirmed that the presenters will be back on air tomorrow to facilitate the station’s Volkswagen competition.

According to reports, details of the Croke Park gig were intended to have had their first on-air revelation by Sheeran himself in a phone call with Ryan Tubridy on RTÉ 2fm at 8.45am but Jim-Jim and Nobby ignored this and aired the news first.

[UPDATE (Feb 20th)]: Ed Sheeran himself has rowed in to the affair, in an apparent effort to have the pair “reinstated” with this reply to the Irish Independent:

@Independent_ie nothing to do with me, lemme send an email

Ben Murray filled in for the duo this morning while many people continued to protest via facebook and twitter, saying they wouldn’t be tuning back in to the Strawberry Alarm Clock until Jim-Jim and Nobby were re-instated.