RTÉ Radio team up with Aviva for Fan Studio broadcasts 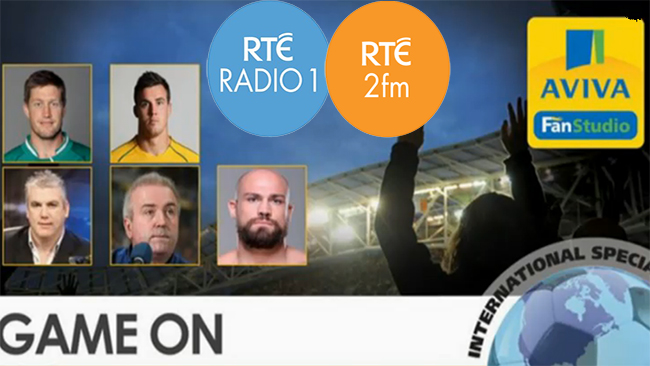 RTÉ Radio is collaborating with Aviva for special coverage of Ireland’s home international football and rugby matches from the Aviva Stadium’s special “Fan Studio” – and sports fans are invited!

Not only will the state broadcaster be presenting previews and live commentary of the games from the Aviva Fan Studio, but listeners will have the chance to be there too, to engage with rugby and football legends while also enjoying the best seats in the Aviva Stadium for the match.

RTÉ Radio 1 will broadcast live coverage of Ireland’s home internationals from the special studio with previews of the matches being broadcast on RTÉ 2fm’s Game On programme on the Thursdays before the games;- and listeners will have the opportunity to win places at the Aviva Fan Studio through the Aviva, RTÉ and IRFU / FAI social media sites.

Kicking off the season of games, RTÉ 2fm’s Game On will be live from the Aviva Fan Studio from 7pm this Thursday to preview the Valentine’s Day clash with France. On the panel will be Munster and Ireland’s Donnacha Ryan plus former Ireland internationals Bernard Jackman and Reggie Corrigan, while be UFC star and former Leinster School’s Cup winner Cathal Pendred and Game On regular Alan Cawley will add a different perspective on the big game.

The programme will also be streamed live on www.rte.ie/gameonTV and will be available on demand through RTÉ Player – plus, the station are offering 50 lucky fans the chance to attend the live show in the Aviva Fan Studio at the Aviva Stadium.

Following this, on Saturday, RTÉ Radio 1’s Saturday Sport will be live from the Aviva Fan Studio from 2pm to cover the clash with the French (which kicks off at 5pm). Joining the RTÉ Sports team will be a wealth of Irish rugby talent including RTÉ panellists Bernard Jackman as well as Shane Byrne and Aviva brand ambassador David Wallace.

Also on Saturday, 8 lucky fans will get a chance to experience the best seats in the house alongside Wallace, Jackman and Byrne and the RTÉ Radio 1 sport team in the Aviva Fan Studio for the match, while fans at home can interact with the Aviva Fan Studio and the guests of both using #AvivaFanStudio or through @AvivaStadium, @GameOn2FM and @SatSportRTE or @RTERugby.

The Aviva Fan Studio preview will continue on RTÉ 2fm Game On for the Republic of Ireland football team’s European Championship qualifier with Poland at the end of March, followed by the two home internationals in June; the friendly with England and the European qualifier against Scotland.

More information – including the chance to attend an Aviva Fan Studio event can be found at www.Aviva.ie/FanStudio.