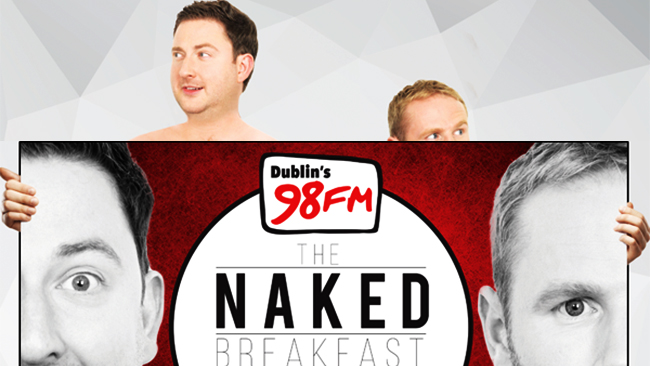 Dublin’s 98FM have confirmed that their hugely successful “Naked Breakfast” event is to return next month – and it will be “bigger and better!”.

The special event, which took place in late November 2014, won multiple awards in the past year, including the Grand Prix in the Media Awards in April, a silver award in the New York Festival Radio Awards in June and a special outstanding achievement award at the PPI Awards on Friday night just gone.

In an unprecedented move, the event saw the station’s breakfast programme “The Ray Foley Show” broadcast completely live – including everything from music, presenters and news to the voice-overs, imaging and even the ads – from the stage of Vicar Street.

A host of exciting guests from the world of music and comedy were also on stage in front of an audience of 400 people – and now the station have promised to run the event once again, with Ray Foley, J.P. Gilbourne and new recruit to the show Muireann O’Connell along with special guests, performing the show completely live (but no, not actually naked!) in the much bigger venue of the R.D.S. on Friday November 27th 2015.

“Our fantastic on-air talent and the hard work of the team behind the scenes of Naked Breakfast are key to 98FM’s success. We are delighted to have won the award whose predecessors have been tough to match. It is a testament to the breadth of talent and creativity in 98FM and a true reflection of our hard work.”

98FM were also winners on the night in Best News Bulletin category and their drive-time presenter Dara Quilty scooped the Music Presenter of the Year prize.