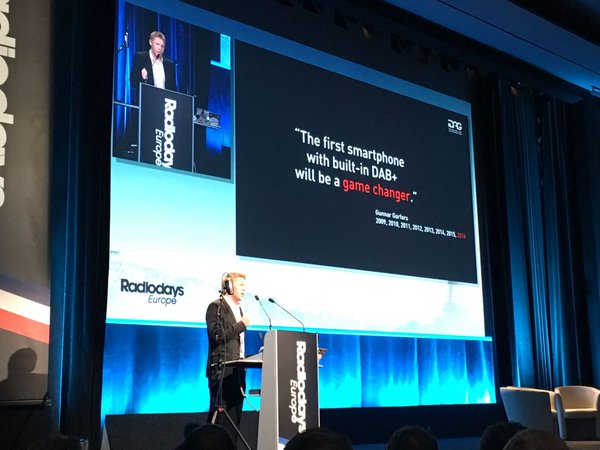 The LG Stylus 2 – complete with DAB+ radio built in and hybrid radio software from Radioplayer, has been announced at Radiodays Europe.

Speaking at the event in Paris today, Managing Director of Radioplayer Michael Hill demonstrated the hybrid Radioplayer app, which will be automatically installed in LG Stylus 2 smartphones sold in the UK and Norway.

The new hybrid Radioplayer app is capable of switching intelligently between broadcast DAB and streaming. It uses the DAB technology in the LG chipset to scan for available free-to-air DAB stations in the background. When a listener selects a station, the app automatically plays the broadcast version if available.

If the signal degrades as the phone moves around, the app switches to streaming and monitors the station on DAB in the background. Once the signal strengthens again, the app automatically switches back to the free-to-air DAB feed.

Radioplayer collaborated with the International DMB Advancement Group (IDAG) and All In Media, to develop the hybrid app.

Michael Hill added: “Across the industry we’ve been experimenting with hybrid radio for several years now, so it’s great to see a mass-market smartphone that’s capable of powering it. I’m particularly proud that we’ve delivered the world’s first hybrid Radioplayer app and I’m looking forward to sharing what we’ve learned, so other apps and smartphones can adopt this capability”

Helen Boaden, BBC Director of Radio said “This is an enormously exciting development from the UK radio industry. It will give smartphone listeners an effortless radio experience, and ensure they keep connected to the stations they love.”

Digital Radio UK welcomes the phone, CEO Ford Ennals saying: “Digital Radio UK welcomes today’s unveiling by LG Electronics of the LG Stylus 2 – the world’s first DAB smartphone. This innovative new handset will bring reception, cost and battery life advantages to listeners and with the addition of the world’s first hybrid Radioplayer app in the UK provides a better digital radio experience by combining DAB broadcast with IP delivery of information and visuals for the first time. We are looking forward to working with LG and their partners in the coming weeks to support the UK launch of the LG Stylus 2.”