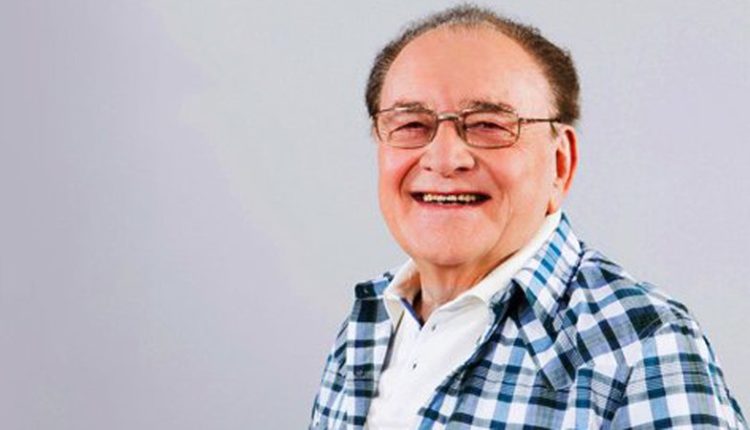 Larry Gogan is leaving RTÉ 2FM after 40 years and making to move to RTÉ Gold.

The much-loved presenter will host his last 2FM programme on Thursday 31st January 2019 as part of a day of special events celebrating his work and life.

Larry presented the Golden Hour and was known as the DJ with the Golden Voice. He began presenting shows on RTÉ Radio in the 1960s, working primarily on pop music programmes and he was in the original line up for Radio 2 in 1979. But he will best be remembered on 2FM for The Golden Hour and ‘Just a Minute’ quiz.

Larry was the voice of the ‘National Chart Show’ counting down Ireland’s top 40 hits each week and announcing the new number one and has won a number of awards for his contribution to Irish music including a Meteor Award and is a member of the IMRO radio awards hall of fame.

On successive occasions, he was voted Top DJ in one poll or another. In 2008 The Irish Recorded Music Association (IRMA) presented the DJ with the IRMA Honours Award in recognition of his outstanding contribution to Irish music over the last forty years. Broadcaster Terry Wogan presented Gogan the award. In 2005 he won the Trax Top Presenter Award, the IRMA Honour and the Meteor Industry Award in 2007. RTÉ has also rewarded him by naming a 2FM studio after him.

Larry will continue to present the ‘Golden Hour’ on RTÉ Gold weekdays at 1pm.

Larry Gogan said, “I have loved all my time on 2FM and would like to thank all the amazing support from all my listeners, great colleagues and all the fantastic Irish and International artists I have been privileged to support and be a part of their success. I am thrilled to be moving over to RTÉ Gold full time and being part of that exciting new digital world.”

Dan Healy, Head of RTÉ 2FM and Radio Strategy said, “There have been huge names associated with 2FM such as Gerry Ryan, Dave Fanning, Ian Dempsey, and of course Larry Gogan. Larry and these other great broadcasters were the foundation on which 2FM was built and paved the way for the other music-driven stations in Ireland.

“Larry’s love of music and radio has made him the greatest music DJ in Irish broadcasting history. No matter what time of day, whether it was weekday or weekend’s – audiences always followed Larry. The best thing any aspiring music presenter can do is to listen to Larry broadcasting. That gorgeous voice is his, not much you can do about that, but listen to the crisp tight warm links and how he only ever talks about the music. That is how to do it.

“Larry won all the major radio awards in Ireland including the highest accolade The Radio Outstanding Achievement award in 2012. 2FM owe Larry a great deal and I am proud and grateful as are all my colleagues at 2FM that we can claim that we worked with Larry Gogan. We had Gogan, the UK had Wogan. The greatest of them all is Larry Gogan and we look forward to continuing to listen to him on RTÉ Gold.”

Dee Forbes, Director General, RTÉ added: “Larry Gogan is a living legend, a true household name, and a genuine national institution. His legacy transcends generations – he is remembered as the first man to spin a disc on Radio 2; others will fondly mention him in connection with a hilarious moment on the Just a Minute Quiz; others still will know him as the man who starts Christmas with a song – and that, by the way, is a tradition I’m sure Larry will continue on RTÉ Gold. As one disc ends, another begins: thank you for the music Larry, the music you launched to millions on 2FM, and the music yet to come on RTÉ Gold.”

Jim Jennings, Director of Content, RTÉ said: “What an achievement to present on a station for 40 years. It’s unlikely to be done again in our lifetime. I’m sure everyone will agree with me when I say that Larry Gogan is simply the best in the business.

“He will always be remembered on 2FM for his great voice and kind nature to the listeners. He advocated Irish artists and Irish music throughout his career and is well respected in the music industry as a result. 2FM was very lucky to have him for so long and now he will continue to play the hits along with favourites like the the Golden Hour and Just a minute Quiz on RTÉ Gold.”