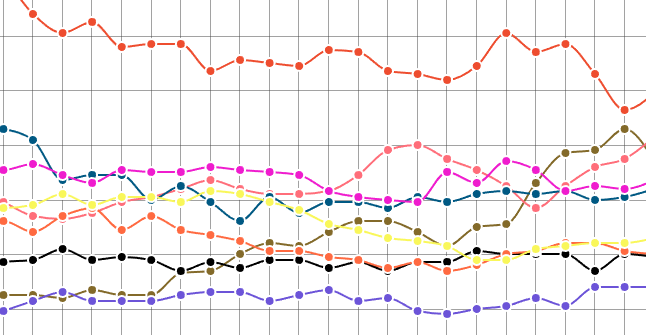 The latest JNLR results show more than 3.17 million listeners (15+) tune into radio every weekday, with daily radio listening at 83% of all adults.

“Today’s JNLR results share a very positive story about the power of radio in Ireland. Radio doesn’t sell advertising space, it sells the ability to reach a huge audience and the results out today show that 3.1 million people everyday tune into Irish radio. These audiences are in every county in Ireland and include listeners of every age group from 15 years upwards.

“Radio talks directly to the ears of 83% of people every single day and that is a strong selling point to brands, businesses and advertising agencies. In addition, with radio audiences tuning in for an average of 4 hours a day and while a 30-second message may seem short, on radio it will resonate with more people, more often, reinforcing that crucial message that brands want to communicate effectively.”

Communicorp’s Newstalk is claiming to be Ireland’s second most-listened-to radio station on Daily Reach, but has a weekly listenership of 768,000.

Patricia Monahan, Managing Editor of Newstalk, said: “Today’s figures are the result of strong team-work across the Newstalk schedule. It is great to see all-time high listenership results for all shows across the day from Newstalk Breakfast to The Hard Shoulder with Ivan Yates”.

Ian Dempsey saw his breakfast listenership grow by 18,000 (book-on-book) to a 3-year-high of 180,000. Ian, who recently celebrated 20 years waking up the nation on Today FM said: “I’m delighted; it’s a massive figure for us. It’s all thanks to our regular breakfast show listeners and all of the new recruits who choose to join us every morning!”

Matt Cooper continues to deliver ‘The Last Word’ to more people; his drivetime show (4.30-7pm) grew by 5,000 to an audience of 142,000. Commenting on his figures, Matt Cooper said: “It’s great to be at our highest audience in almost 4 years, our mix of news and entertainment and all things in between seems to be appealing to more and more people and long may it last”

Adelle Nolan, Content Director commented: “Ian Dempsey is without doubt the King of Breakfast radio in Ireland. To have almost 900,000 people tuning in each week to Today FM is a huge honour and a reflection of the hard work and dedication that goes into the station both on and off the air”.

Keith McCormack, CEO, Today FM said: “It’s great to see Ireland’s love affair with Today FM continues and it’s particularly interesting to see that it’s a young audience that are enjoying the brand and driving the growth. How they listen may be changing, but what remains constant is their desire for great personalities and great audio content.”

Meanwhile, Dublin stations 98FM and SPIN1038 enjoyed strong performances with 98FM now entertaining a weekly audience of 231,000, up by 8,000. 98FM now commands an 8.3% share of the Dublin radio market, its highest since early 2012, making 98FM the second most-listened-to music station in Dublin.

Each of the station’s daytime shows have grown listenership, including 98FM’s Big Breakfast which now reaches an audience of 49,000, up 9,000 listeners. SPIN1038 has strengthened its position as the number one station for 15-34s in Dublin, now commanding a market share of 19.6% among the demographic in the capital. The station’s weekly reach now stands at 271,000, 82,000 of which tune in to SPIN Hits with Steve K (weekdays, 3-7pm), meaning SPIN1038’s drive-time listenership is second only to RTE Radio 1’s in Dublin.

Speaking about the latest results for Communicorp, Adrian Serle, Group CEO, said “We are delighted. We have seen the highest ever market share for Newstalk, the biggest weekly reach for Today FM and the highest share for 98FM since 2012. In addition to our on-air growth, our audience consumption across digital platforms is thriving, with massive increases in streaming and podcast consumption. Digital audio is being created, shared and listened to by over 1m people every week in Ireland. Our recent launch of digital sales platform, audioXi, is a huge development for our business, enabling advertisers to target this previously untapped digital audio audience for the first time ever.”

We're Connecting Cork, Every Week, Every Day, Every Hour.

Tom McGuire, Head of RTÉ Radio 1 says, “I’m delighted that RTÉ Radio 1 has retained its loyal audience and welcomed new listeners to daily shows in the latest JNLR survey. It is a tribute to our programme makers and contributors that more than 1.3 million people tune in to RTÉ Radio 1 every week for a schedule that entertains and informs across all genres.”

Dan Healy, Head of Radio Strategy and RTÉ 2FM says: “2FM continues its steady progress and is now the largest national station for 15-34 year olds with a market of 13.6% compared to Today fm on 9.5%. We continue to provide exclusive programming which supports Irish music with initiatives such as 2FM Rising and of course The RTÉ Choice Music Awards.”

Aodán O’Dubhghaill, Head of RTÉ lyric fm says: “This consistent book for RTÉ lyric fm is another confirmation that quality classical music has an audience on the island of Ireland and we at RTÉ lyric fm are honoured to be the broadcast custodians of that important music tradition.”

At Beat 102-103, 149,000 adults now tune in to the station weekly. The regional station has also seen record audiences at weekends in the latest audience figures.

CEO & Programme Director of Beat 102-103, Gabrielle Cummins, said that it’s an exciting time for Beat: “We’ve just rolled out a brand-new line up that is being well received by our loyal audience. We regularly shout about our talented weekday presenting team, but it’s worth highlighting that I’m also proud of the performances from the weekenders with these latest JNLR results.”

“Radio is 24-7, 365 days a year. We invest heavily in our weekday output, but it’s equally as important that our weekend shows work hard to match the standard set Monday to Friday, so for the likes of The Big Saturday, Old School Sunday and The Sunday Grill to be producing such record-breaking audience numbers is huge.”

She continued: “We’re immensely passionate about the content we provide and we’re confident the recent changes will only serve to grow our audience numbers over the next 12 months. Finally, I’d like to thank our 149,000 listeners for choosing Beat consistently, on a weekly basis.”

Speaking about the recent results, WLR Programme Director, Michael Byrne says, “It has been a great start to 2019, and welcoming Damien Tiernan, the new voice of Waterford to the team really adds to the excitement. I am positive the growth will continue throughout this year and beyond.”

Meanwhile, WLR Managing Director, Des Whelan says, “Another really strong set of listenership figures for radio and a great result for WLR. Over the past 12 months WLR has grown its listenership by 6,000 listeners with 71% of all adults living in Waterford listening to WLR each week. That’s a phenomenal vote of confidence in the presenters and programmes on the station from our listeners and we look forward to giving our audience an even better service in the year ahead.”

Midwest Radio has a Yesterday Listened figure of 63% – up 2% for the previous survey. However, the stations market share has increased by 3.9% and now stands at 54.8%.

Midwest Radio’s CEO Paul Claffey said: “The results are phenomenal and great credit has to go to our entire team who have put their shoulder to the wheel and made sure that we deliver the service that people want. Midwest Radio is very much a team effort and every single member of our staff in every department of our business deserves great credit for keeping us where we are”.

Kfm is reporting it leads the way across all listening parameters – comfortably ahead of any national or regional station broadcasting into county Kildare.

Kfm CEO/Executive Director Clem Ryan said: “The figures – nationwide and in county Kildare with Kfm – Kildare’s most listened to radio station – prove beyond doubt the Reach of radio: the reason that advertisers choose radio as the best medium to market their businesses and products to the most diverse and biggest audience of any other media”.

Here are some more facts and figures shared on Twitter:

The latest #JNLR figures are in and we are delighted ? ?

NO.1 SHOW IN CORK – 78,000 listeners tune in to the Neil Prendeville Show on @CorksRedFM everyday. Thank you for tuning in Cork ? #JNLR #ChooseRadio pic.twitter.com/Q9fI363Yzl

79,000 listen to the Strawberry Alarm Clock every morning!

We've an extra 10k listeners since the last #JNLR

We have some incredible prizes coming up on @FM104 this year!

Thanks everyone from the whole team! ?⏰ pic.twitter.com/lmW4sNCESv

We now have 49,000 lovely people tuning in every morning!

It's the highest a breakfast show on @98fm has been since 2012 ?#jnlr pic.twitter.com/JXRdRomHtx

Radio continues to be the number 1 choice for Irish audiences with a combined strength of 85.5% share of the audio market in Ireland. This compares with 8% own music, 4.9% Spotify and 1.6% Podcast. #ChooseRadio #JNLR

To be in our next JNLR round-up, please add news@radiotoday.ie to your PR lists, or just send us your figures. It makes it so much easier for us to include everyone 🙂