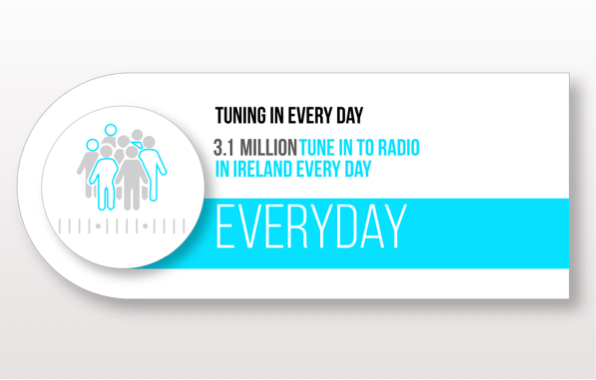 The latest JNLR figures show 82% of the population tuning in to radio every day, which translates into weekday figures of 3.1 million listeners.

And earlier this week, JNLR published details of a pilot study which it conducted recently. The study confirmed that ‘Day-After Aided Recall’ remains the best methodology measure of Irish radio listening habits and the results cannot be disputed.

Sales wise, the latest figures show that Irish radio continues to be the audio medium of choice for people in Ireland with 85.5% share of the audio market in Ireland.

Gabrielle Cummins, Chairperson of the Choose Radio Group: “Today’s JNLR results don’t lie: they highlight a powerful story about the resilience of radio in Ireland. On Radio, you are always front and centre, grabbing the full attention of the audience. Radio stations don’t hide your important message on the bottom of a web page or leave it to fight for attention amid a sea of other competing messages. We can ensure that your ad will be delivered directly to the ears of 3.1 million people daily. Radio is an active medium with a unique ability to stir emotions, create reactions and ultimately build demand. In a competitive market, that fact is a key selling point which differentiates radio from every other advertising medium”

Newstalk has maintained its position as the second most listened to station in Ireland with 414,000 listeners tuning in every day. This is an increase of 22,000 over the last year.

Newstalk has 746,000 listeners each week and has achieved a National Prime-Time Market Share figure of 6.8%, up 0.3% year on year.

Managing Editor of Newstalk, Patricia Monahan commented today; “We are delighted with today’s results which clearly show that we are providing our audience with the opinion and analysis they want. Leading the way are Ivan Yates and Sean Moncrieff who have seen significant audience growth in the last 12 months. It is also great to see our long-standing weekend programmes continue to make gains ”.

Drivetime host Matt Cooper is celebrating a 4 year high for ‘The Last Word’ (4.30-7pm) as his audience increased 10,000 to 152,000 (increase of 14,000 year-on-year). Commenting on his figures, Matt Cooper said: “We never take anything for granted, especially our listeners, so we’re delighted that the varied mix of topics and guests, is appealing to an ever-larger number of people”.

Dermot & Dave (9am-12pm) saw a slight dip in this book (-2,000) however with a current listenership of 163,000, Dermot & Dave are still the biggest mid-morning show outside of the national broadcaster. The duo is currently touring the country with their latest comedy tour and will play a sold-out Vicar Street show next weekend.

At Beat, Beat Breakfast, now has its biggest audience since the station launched back in 2003. The show, hosted by Niall, Vinny and Trish, now reaches 46,000 people every day. Meanwhile, the Saturday edition of the programme has increased its audience by 69% in 12 months.

Beat Breakfast presenter and Head of Station Sound Niall Power says “As part of one of Ireland’s longest running morning shows, I often ponder whether people might be getting sick of you! So, it’s somewhat of a relief and a joy to see our audience reach its highest number ever. I’ve always believed we have a special relationship with our listeners- we care about them and they’re passionate in return about us. I’m so grateful that ever-increasing numbers are choosing to give us their time and company every day!”

WLR tells us the latest figures for the station show that it has increased its daily reach by 2 points, jumping from 46% to 48%, with market share increasing by a steady 1% from 42% to 43%. 82% of people in Waterford listened to the radio yesterday and they spend on average over 4 hours listening per day.

Various shows across the weekly schedule record gains in listenership year on year. Notably, Waterford listeners have given WLR’s newest recruit, Damien Tiernan, a warm welcome since he joined the station’s mid-morning show ‘Déise Today’ back in January. Meanwhile, Geoff Harris continues with 14,000 listeners tuning in to The Lunchbox every 15 minutes.

Increases can also be seen in John O’Shea’s Absolute Irish on Sunday nights from 9pm-midnight. Formerly ‘Guaranteed Irish’, the show was renamed ‘Absolute Irish’ to coincide with the launch of WLR’s sister digital station of the same name, which broadcasts the best of country and Irish music to a national audience 24/7 via the Irish Radio Player app and its dedicated website. John O’Shea’s ‘Absolute Irish’ has a record 13,000 people tuning in every 15 minutes.

Live 95 Station Director, Joe Nash said: “We aim every day to keep the listeners of Limerick entertained and informed and we are proud to focus more than any other radio station on this great City and County. We are grateful to our listeners and the business community for staying local in such numbers, because we know they are as proud of Limerick as we are, at Live 95.

“I want to especially thank the great team here at the radio station who are so dedicated to bringing the best radio possible, to the best place in the country.”

82% of adults in Ireland tune to radio each day. But in Cork, that figure is even higher at 85%. Well done to the team at @Corks96FM and @C103Cork for both increasing market share. #jnlr #chooseradio pic.twitter.com/bceKFDdwKx

Today is #JNLR Radio Ratings Day
Thank you from myself and @OnlyRossBrowne for tuning in.
Our breakfast show @Corks96FM has added another 5000, taken us to 52,000 daily listeners. To celebrate, check out this amazing giveaway #ChooseRadio pic.twitter.com/5hf8FwgZ3b

Team @morningireland still the number one choice for radio in latest #JNLR results. In its 50th year, @thisweekrte welcoming thousands more listeners @RTERadio1. Thanks to all. pic.twitter.com/SVjzgMjN3y

Radio 1 remains the only Irish radio station with a weekly reach of over 1 million. Here are some other facts for this book:

Peter Woods, Managing Editor, RTÉ Radio 1 says, “RTÉ Radio 1 consolidates and builds its listenership – this is a tribute to the hard work of our programme teams and a roster of some of the best on-air talent in the country. It’s also an endorsement of the new people we’ve brought in, like Katie Hannon, Cormac Ó hEadhra and Maggie Doyle. And it’s also about our listeners. It is always about our listeners.”

Dan Healy, Head of RTÉ Radio Strategy and RTÉ 2FM says, “We’ve had a great five years on RTÉ 2FM, but times are changing and we’re getting ready to change again. It’s exciting times for 2FM as we head into a new schedule this summer. We’ve some really great plans in place as we continue to celebrate and support the music that we have always championed here on 2FM”.

Here are some figures from around the schedule:

Aodán O’Dubhghaill, Head of RTÉ lyric fm says: “The JNLR release is all about numbers but today there is only one that really counts for us, TWENTY. Today RTÉ lyric fm celebrates 20 years on air. Twenty years of celebrating the best in classical music with our loyal listener base, many of whom have been listening since day one. So while our colleagues around the radio industry celebrate the ups and downs, their quarter hours and share, we’ll just focus on the number twenty and celebrate our time on air where every day we strive to make the world a place Where Life Sounds Better”.

RadioToday’s JNLR data is limited to what we are sent by stations so to include your results here, please email them to news@radiotoday.ie