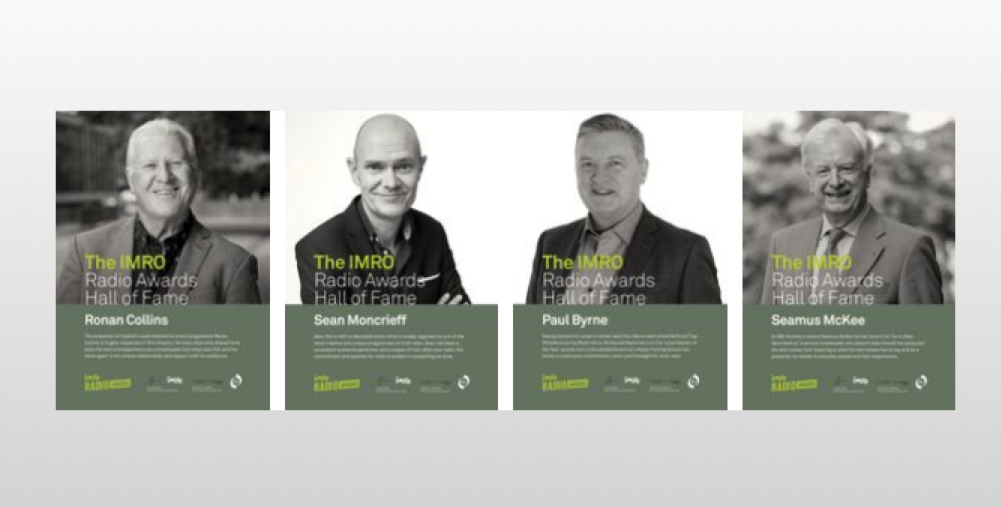 The Hall of Fame ceremony will take place on Tuesday 24th September 2019 in the offices of the Broadcasting Authority of Ireland where the Hall is housed year-round.

They join names such as Gay Byrne, Pat Kenny, Larry Gogan, Ian Dempsey, Áine Lawlor, Candy Devine, Dave Fanning and Tony Fenton amongst others. The Hall of Fame celebrates those well-known names on air and also those behind the mic that make Irish radio such an integral part of daily life.

The IMRO Radio Awards take place at the Lyrath Estate Hotel, Kilkenny on Friday 4th October 2019 where the winners of the 40 categories will be announced.

Ronan Collins is admired and respected throughout Irish broadcasting for his affable personality and his natural style. Ronan is a huge attribute to RTÉ in both the television world and also on radio. Ronan began his national radio career on RTÉ Radio 2. His daily programme The Ronan Collins Show , from 12-1pm, is all about easy listening and light entertainment and is amongst the biggest radio shows on RTÉ Radio 1.

Ronan was presented with an IMRO Special Recognition. The tribute recognises the enormous support that Ronan has given to Irish music and Irish artists over the course of his many years in radio.

Ronan is no stranger to the Irish TV screen and hosted Play the Game and the Irish Lotto. In 2017, Ronan featured in RTÉ2 documentary Trauma, where he told his story on how he almost became paralysed. Just this summer (2019), Ronan Collins presented a new style of radio programme on Sunday mornings, The Collins Collection.

Ronan is 41 years married and has three children, two girls and one boy. Originally from Phibsboro in Dublin city, he now resides in Co. Meath. He enjoys a good game of golf, music and the occasional gig (Ronan used to play in a band along with Dickie Rock!)

Sean presents ‘Moncrieff’ on Newstalk every weekday from 2-4pm including the well-loved Movies and Booze on Friday afternoons.

Moncrieff is the longest serving presenter on the Newstalk schedule and has been a consistently strong audience performer. His unique and quirky style has seen Sean win multiple IMRO Radio Awards.

Sean was born in London but moved to Ballinasloe, Co. Galway at the age of 12. He then went on to study journalism in Dublin and then English and Philosophy in UCD.

Outside of broadcasting, Moncrieff’s passion is writing, in particular non-fiction books, and to date he has written three novels and two non-fiction books, while he also writes a weekly column for the Irish Times and is the voice of The Restaurant on Virgin Media.

Sean has devised and presented many hit TV programmes, including The End, Good Grief Moncrieff, Black Box and IFTA-nominated Don’t Feed the Gondolas

In August 2005 Radio Kerry completed the purchase of Shannonside/ Northern Sound, becoming the first of the original Irish owned local radio stations to expand in this way.

His career achievements mean that Paul has played a key role in the development of the local radio industry in eight counties across the country. The Radio Kerry Group has won multiple IMRO and other radio awards across all areas of output, including winning Local Radio Station of the Year on 5 occasions.

Graduates from the Radio Kerry Broadcast Training School now work in radio stations across Ireland. Paul is also a Board member of IBI and IRS.

Throughout his career he has shown continuous energy, commitment, vision and foresight in the protection of the local radio industry in Ireland.

Seamus McKee is a lead presenter and broadcast journalist who has presented BBC Radio Ulster’s, Evening Extra since 2009.

High profile documentaries Seamus has worked on for BBC NI, BBC Radio 3 and Radio 4 include the disappearance of Lord Lucan and the life and times of the late Gerry Fitt and presented the Radio Two Arts Programme for BBC Radio Two.

Seamus has been the BBC NI commentator at a number of outside broadcasts including President Clinton’s visits and the Omagh Commemoration as well as the 1916 centenary commemorations in Dublin and at the Somme.

Seamus attended Queen’s University in Belfast and is a qualified teacher, and previously taught English and French at Our Lady and Saint Patrick’s College, Knock in Belfast. Seamus started his BBC career as a freelance broadcast journalist reporting on sports, arts and current affairs, while he continued to teach part time. In 1981 he became a full time presenter on Good Morning Ulster.

Born in Belfast, Seamus still lives in the city with wife Brenda and has two daughters and two grandchildren.