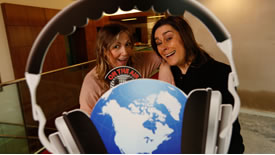 Irelands’ independent radio stations are celebrating World Radio Day with the popularity of radio in Ireland at an all time high.

Today is the day appointed by UNESCO and endorsed by the United Nations General Assembly to celebrate the medium of Radio.

An event at the EBU is taking place discussing the future of radio, and in particularly, Digital Radio.

“World Radio Day celebrates the unique nature of radio and the importance of radio in people’s lives. Independent radio stations impact on people’s lives in every part of Ireland on a daily basis. They are a source of news, a resource for local and community groups and organisations, they provide companionship, entertainment and are even known to be turned on in an empty house to be used as a deterrent for burglars!”

With more than 1500 people employed in the sector, independent broadcasters make a significant economic, social and cultural contribution to the Irish economy. The IBI represents 2 national radio stations, 4 regional, 1 multicity and 27 local radio stations throughout Ireland.

This is the second annual World Radio Day which aims to raise awareness about the importance of radio, facilitate access to information through radio and enhance networking among broadcasters.