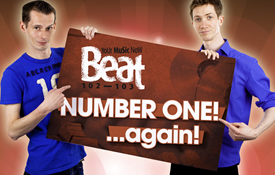 The latest audience figures are out and show daily radio listening remains steady at 84% – with commercial radio continuing to lead the way.

Across the industry, 58% of adults are tuning into their local or regional station whilst 45% are listening to a national station. Most listen on average for 4 hours per day in the 7am to 7pm slot.

At RTÉ, Radio 1 continues to be the most listened to radio station in the country with over one million listeners each week. However, the station’s weekday reach is down 34,000 to 863,000 listeners.

The latest book shows the station’s breakfast show Morning Ireland is the biggest radio show in the country, with a weekly listenership of 443,000.

Liveline with Joe Duffy is the second most-listened-to radio show, with a listenership of 424,000, up 4,000 since last time.

“Over on lyric, stability at 3% weekday reach is very encouraging. Marty continues to build listeners at breakfast, while the drivetime slot on lyric has seen a gain in this book.”

Clare Duignan continues: “Last year we had a run of four really encouraging books for 2fm, and these figures are a continuation of that success. Hector has gained, Colm has gained, Larry has gained, Ryan Tubridy has had a marginal drop to 159,000, down 1000, and this is a conclusive indication that his listenership is stable and loyal, and there to be grown.”

Around the commercial stations, FM104 remains the number one music station in Dublin with 220,000 listeners – 106,000 of those at breakfast.

Thank to you guys. we're still the No.1 music station in Dublin! New JNLR audience figures were released today.

Radio Nova increases market share by 30%. CEO Kevin Brangan said, “This is a breakthrough result for us, indicating the strong appeal that Radio Nova. We’re growing in a very competitive market-place and this is a reflection of the investment we ‘re making in our brand and programming”, he said.

Beat 102-103 now has 151,000 weekly listeners in its region, a gain of 16,000 new pairs of ears over the past 12 months. Niall Power, Head of Station Sound at Beat 102-103, says: “Not only are we now attracting more listeners on a daily and weekly basis than ever before, these listeners are choosing to stay with us longer.”

Chief Executive Kieran McGeary said: “What ever way you look at these numbers Cork’s 96FM and C103 by far out performs all other local and national stations in the Cork market. I am very proud of that and I am also very proud of the people who made it happen. I’d like to thank our staff and also the people of Cork for their continued unwavering support for their local radio stations.”

At Radio Kerry, the station has increased market share from 51% to 53.9%. General Manager Fiona Stack thanked listeners and advertisers for their support, and said that the station is very proud to be Kerry’s voice.

How has your station done? Let us know news@radiotoday.ie