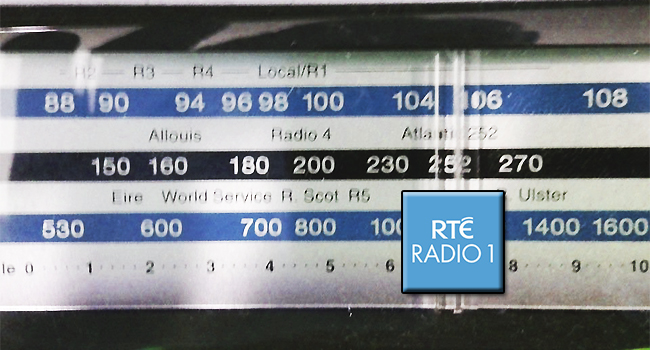 RTÉ Radio 1 has today confirmed that its Longwave 252 transmission service, which was scheduled to be closed in January 2015, now has a revised shutdown date of 2017.

Following the recent postponing of the service’s closure from October 27th of this year to January 19th next, the state broadcaster came under renewed pressure recently, with further calls for the the service to be saved.

Following extensive consultations with listeners, a wide range of diaspora groups in the UK and relevant bodies in Ireland, RTÉ has taken the decision to slow down the pace for transition from Longwave, saying that in doing so, they have considered contact from listeners and submissions from a range of groups; all of which highlighted that more time was needed to understand and enable migration to digital platforms for all listeners.

Over the extended transitional period, the broadcaster says that RTÉ Radio 1 will operate a full Longwave service in 2015, with reduced hours in 2016, working toward full shutdown in 2017.

RTÉ say they believe that operation of the longwave service beyond this time is not tenable since significant capital costs for replacement of infrastructure will arise, adding that they are targeting the Longwave service for shutdown on the basis that it is an outdated and costly technology, representing poor value for money, and that transition to better quality, more sustainable digital alternatives is essential over the longer-term.

In a further development, The Department of Foreign Affairs and Trade has announced it is prepared to work with RTÉ to commission specific research to understand the community in the UK who listen to the Longwave service; to learn in greater detail about listeners’ circumstances and of the technologies they use.

This research will be conducted next year, will be funded by the Department, and will include perspectives from community groups representing the Irish elderly in the UK. RTÉ say they expect this research to inform the options and information that will accompany the final closure of the Longwave service.

Tom McGuire, Head of RTÉ Radio 1, said: “We want to work with all those concerned to ensure that RTÉ Radio 1, that voice from home, remains a voice that can be heard where it needs to be heard. All groups asked for more time. We’ve listened particularly to the concerns raised by and on behalf of the elderly Irish in the UK. Cost-reduction remains a key priority for RTÉ and we remain convinced that, in the longer term, Longwave has had its day. Nonetheless and despite the mid-term cost impact, RTÉ believes it is necessary to take a collaborative approach and slow this transition.”

JP Coakley, Head of Operations, RTÉ Radio, said: “We’ve learned that the closure requires a greater degree of patience and nuance and we very much welcome the Department of Foreign Affairs’ offer of help in this respect. We need to transition from Longwave, but we do understand that some alternatives still feel remote, especially to elderly audiences who cannot hear Radio 1 on FM. The next year or so will see growth in adoption of new technologies and alternatives will strengthen. The rise of smart-phone and tablet usage among older users, the growth of platforms like Freeview in the UK, our own Radioplayer and the imminent launch of the Irish Radio Player, all offer sustainable, practical solutions into the future.”

John O’Mahony, Fine Gael TD for Mayo and Chair of the Oireachtas Transport and Communications Committee welcomed the announcement this afternoon, saying: “I am delighted at the decision of the RTÉ Board to retain the longwave service until at least 2017. This service benefits thousands of Irish people living abroad and is a crucial part of RTÉ’s public service remit. RTÉ recently appeared before the Oireachtas Committee on Transport and Communications, of which I am Chair, and we discussed the proposed ending of the longwave service. I am delighted that RTÉ has now taken our concerns on board and deferred the move. Through the transition period, RTÉ Radio 1 will operate a full service in 2015, with reduced hours in 2016, working toward a full shutdown in 2017, giving more time for the transition away from longwave to alternative methods of listening”.

Mr. O’Mahony added: “This Government is very focused on the diaspora and improving our connections with the Irish abroad. As such I felt the proposal to close of the longwave service would do a grave disservice to the diaspora and needed a rethink. I am very glad that sense has now prevailed. RTÉ produces high quality news and drama and, through its longwave service, provides a real connection to Ireland for Irish people living abroad. In particular, the thousands of Irish people living in the UK really value having this connection to home and I am glad that they will have it for a while longer while the alternatives are properly worked out.”