Dublin is at the centre of 98FM’s new ads 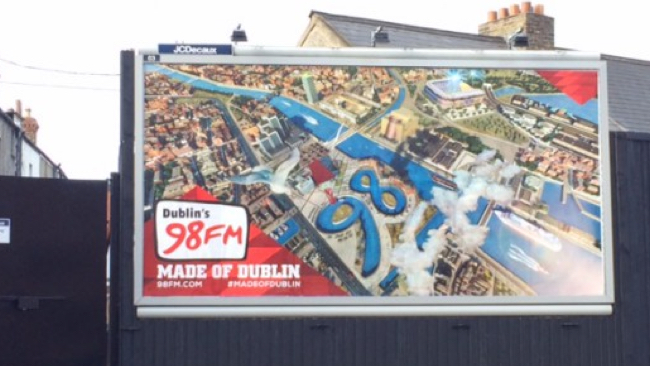 98FM has revealed a new advertising campaign featuring Dublin landscapes instead of the usual mix of on-air personalities.

“The idea grew from the inaugural 98FM Best of Dublin Awards last year which celebrated Dublin’s people, businesses and locations,” the station says. “The awards attracted 300,000 votes and generated such a buzz in the capital that a campaign with our capital city as the leading star was born.”

The landscapes featured in the campaign include some of Dublin’s most recognised features from the River Liffey to the Poolbeg chimneys, and incorporate the 98FM logo which is visible when viewed from a distance.

Speaking about the campaign, Chief Executive, 98FM, Keith McCormack said: “For over 26 years 98FM has reached into the heartland of everything that happens in Dublin – we are Made of Dublin. Using a location as opposed to a personality as the star of our new campaign is a bold move but one 98FM has license to do. Our ultimate ambition is to further cement our position as part of the fabric of the city, so when people think Dublin they think 98FM.”

The outdoor advertising can be seen across 78 locations around the city and includes 48 sheets, europanels and metropoles. Print ads will run in a selection of newspapers and magazines and MPU’s and leader boards will feature on leading websites and blogs.

The campaign will be heavily supported with on-air, online and on-street activity including floor vinyls and a giant 98FM installation where people can add their own stamp – encouraging interaction and social engagement.

On-air competitions will also get listeners involved by encouraging them to generate images of objects or things that are similar in shape to the 98FM logo.

98FM worked with Irish International to create the new campaign, named Made of Dublin.