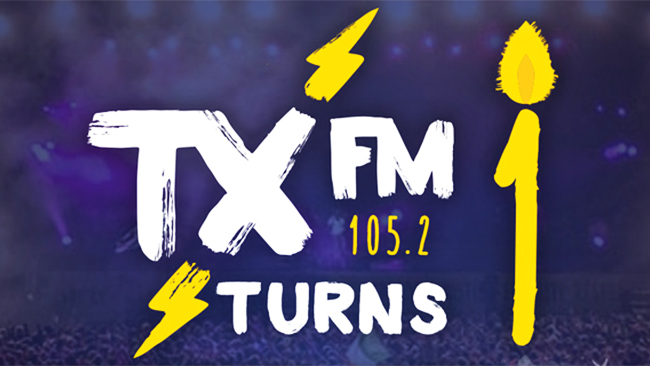 To celebrate, the station say they’re taking the day off… sort of. Cathal, Claire and Joe will be on-air as usual, but they won’t be picking any music… the listeners will.

Every song played between 7am and 7pm will be chosen by the listeners.  From 7am, TXFM want listeners to tell them the one song they’d like to hear more than any other.

They say they “want to know the one song that makes you smile on a dreary day, the one song you HAVE to play at full volume… you get the idea!”.

A rebrand saw Phantom 105.2 become 105.2 TXFM a year ago, and the station has positioned itself as Today FM’s little indie-rock and alternative music sibling in the time since then, with the national broadcaster’s Paul McLoone joining them for a weekend show in January.

Everyone who makes a request during the March 31st birthday celebrations, whether it’s played on air or not, will be put into a draw to win a pair of tickets to Electric Picnic 2015.

Requests can be sent by text to 51052, tweet to @txfmdublin with the hashtag #txfm1 or via facebook.

Joe Donnelly will announce the Electric Picnic tickets winner at 18:55 on Tuesday evening.

The station said: “We’d like to take this opportunity to thank every one of you for tuning in to 105.2 TXFM over the last year.  We’ve done a lot in the last 12 months, but trust us, we’re just getting started”.