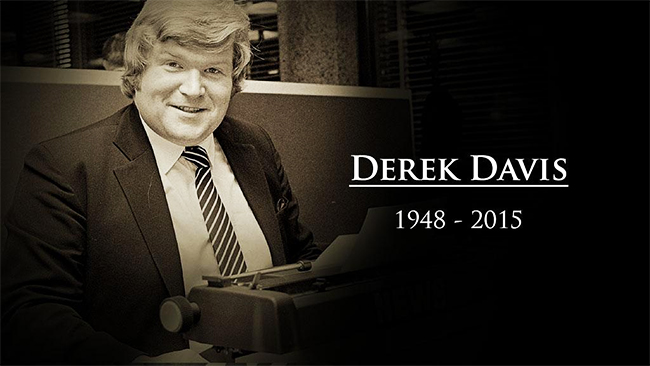 Former RTÉ radio and television presenter Derek Davis has passed away after a short illness. He was 67.

(Above picture: RTÉ Player/Twitter)
Davis, who worked for American network ABC and BBC Northern Ireland before moving to RTÉ, is perhaps best known for presenting popular daytime TV programme ‘Live @ 3’ for 11 years from 1986 alongside Thelma Mansfield, which led to him presenting his own talk show “Davis at Large” and current affairs show “Davis” on RTÉ Televison.

The Co. Down man’s former employer RTÉ confirmed his death this afternoon during the “Today with Sean O’Rourke” programme at midday – a slot which Davis had filled in on in the past while former presenter Pat Kenny was on his summer break.

Paying tribute to Derek Davis this afternoon, Noel Curran, Director General of RTÉ said: “Derek Davis was a hugely popular man, both with audiences and with his colleagues in RTÉ. He was one of the first presenters I worked with as a television director and he was always generous with his time and advice, then and after. He was full of humour and warmth and was one of the most versatile presenters RTÉ has seen. But at heart he was always a journalist, and he brought that inquisitive sense of journalism to everything he did”.

Reflecting on Davis’ career, he added: “From Live at Three to the Rose of Tralee, from Liveline to regional reports on the 2007 General Election for Drivetime, Derek Davis’s popular approach was always rooted in that strong journalism, which had marked his earlier years as a reporter and newsreader. He will be fondly remembered as part of the first two-hander news presentations with Anne Doyle, as well as his long-lasting pairing with Thelma Mansfield, just two of the many highlights in a long and distinguished career. I would like to extend my sincere sympathies to Derek’s wife, his three sons, his extended family, and former colleagues”.

Davis had also filled in on “Liveline” when Joe Duffy took holidays. He also presented “Sunday Magazine With Davis” on 4FM before the station underwent its “Classic Hits” rebrand.

In 2009, he was the winning manager in RTÉ’s GAA reality show “Celebrity Bainisteoir”, with Glasdrumman.

His sense of humour and comedy helped him in his RTÉ career, as he explains below:

Known for his sharp wit, but also for his health problems, which he spoke openly about – Derek Davis was recently interviewed by Brendan O’Connor on RTÉ TV’s Saturday Night Show, regarding his decision to undergo gastric surgery, which led to him losing about 100lbs (just over 7 stone) in weight.

He was interviewed as recently as last Sunday (May 10th) on RTÉ Radio 1’s Marian Finucane programme – which can be heard here.

He is survived by his wife and three sons.

Here are some tributes which have been paid to him today:

So very sorry to hear that Derek Davis has died. A clever man, a wonderful broadcaster and a great colleague. RIP Derek.

Jaysus. Derek Davis was one of the first people I ever asked for an autograph, the day the Nutgrove SC opened in 1984. Very sad.

So sorry to hear of the passing of colleagues Derek Davis r.i.p.

Watching 'Live at 3' with my granny was part of my childhood. RIP Derek Davis

Sad news about Derek Davis. When I was young and came home from school, he would be on the TV.

Sad to hear of the passing of Derek Davis. Live at 3, Play the Game, truly one of Ireland's greatest broadcasters! pic.twitter.com/QxAmi49rDY

Derek Davis RIP My dear old mate of 49 years. A unique man of all the talents and huge generosity.

Very sad to hear of the sudden passing of broadcaster Derek Davis. A true gentleman. #DerekDavis

Derek Davis an under-rated broadcaster, an outstanding university debater, a sublime after-dinner speaker, and a great friend. Will miss him