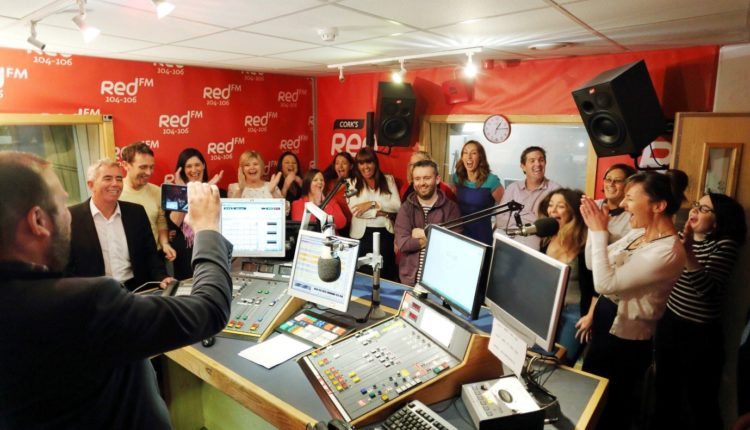 The JNLR results for Quarter 2, 2015 are in! RTÉ will be quite happy with their figures, Today FM may not be and, as our feature picture shows.. there’s some very good news for one rebel station!

The general level of radio listenership in Ireland continues to be incredibly high with 25,000 more listeners than this time last year – representing a possible halt of a recent (fairly small) decline, and a jump of one percentage point, with 84% of all adults now listening to the radio every day.

The Independent Broadcasters of Ireland today produced this infographic to demonstrate the popularity of radio compared with other types of media:

Here’s how the figures shape up this time on a national, regional and local level – and particularly of note is the huge change in the Southern Capital!

Commenting on the latest figures Jim Jennings, Managing Director, RTÉ Radio said: “This is a fantastic day for RTÉ’s radio stations, with an increase in listening figures to almost two million tuning in to RTÉ each week. RTÉ Radio 1 in particular has had a good day with gains across the whole schedule. It demonstrates the strength of the Radio 1 programmes and the support that the listeners give us. The RTÉ 2fm resurgence continues a pace and the gap between RTÉ 2fm and Today FM has narrowed significantly, with just 55,000 listeners between the two stations on weekdays. RTÉ lyric fm continues to grow its audience across the weekends and deliver quality programming for the listeners.”

Meanwhile, Head of RTÉ 2fm, Dan Healy told us: “In little over 12 months, 2fm’s strategy for becoming the most popular station among 20-44s is bearing fruit. From breakfast, and across the entire day, 2fm has seen significant gains. In the last six months we have narrowed the gap with Today FM, growing from 6.2% peak time market share to 7.3% among all adults, while they have dropped from a 9% market share to 7.5%.What a particularly great book for Breakfast Republic, and it’s really exciting to see our night time programming growing rapidly.”

This still represents a very strong year-on-year position for the Communicorp station, who had 36,000 less listeners in the Q2 2014 book. Their “Lunchtime” show with Jonathon Healy now has 81,000 listeners – an increase of 9,000 year-on-year. However, it also means that 2FM have now just nudged ahead of them into 3rd place (behind Today FM and the seemingly unassailable Radio 1).

This improvement in fortunes for RTÉ 2fm has been partly attributed to Ryan Tubridy who, somewhat ironically, is now to move back to RTÉ Radio 1 while Dan Healy’s new sounding station continues to take shape.

Reflecting the national trend, radio listenership in Dublin is up with 26,000 more listeners in the capital than this time last year. Most of those capital based listeners are still tuning in to RTÉ Radio 1, with 305,000 still listening to the national broadcaster’s flagship station, while – among the local stations – FM104 holds the top spot, having gained a modest 4,000 listeners in the last 3 months to climb to 188,000.

We’re giving Cork a section of its own this time as there has been a significant change in the book there in the past 12 months – which has seen Red FM leapfrog its way ahead of local rival Cork’s 96FM to become the No. 1 local radio station in the rebel county.

The last 18 months at Red FM have brought the station a new CEO, Diarmuid O Leary as well as star presenters Neil Prendeville (85,000 listeners – up 100% in the last 6 months) and the return of KC from Today FM, who now enjoys a listenership of 52,000 on his breakfast show.

CEO, Diarmuid O Leary tells us: “We relaunched Cork’s RedFM 15 months ago and we were confident that we had built a solid product that would attract plenty of interest from all over Cork.  We hired two well-known presenters Neil Prendeville and KC.  This combined with first class music, news and sport all focussed on our listener has led us to the position of the highest number of listeners in Cork on a daily basis – we will continue to build on this and make sure our audience are at the heart of everything we do.”

Elsewhere, regional stations such as iRadio and Beat 102-103 have continued to perform well, holding on to their second place positions behind home local stations and ahead of RTÉ Radio 1.

Head of Station Sound Niall Power told RadioToday: “it’s a fantastic achievement for us to remain Number One station for 15-34 year-olds, 20-44 year-olds and All Adults in the South East. Our small, passionate team of talented broadcasters continue to produce engaging, relevant content for young adults on air and online”.

He added: “I’m also over the moon with the record figures for Beat Breakfast – the highest morning listenership since Beat came on-air twelve years ago. Our simple promise of a bit of craic, the best competitions and the biggest hits is really resonating with listeners across the five counties.”

Traditionally the station with the highest local percentage of listeners is Highland Radio in North Donegal. This hasn’t changed in this book, despite the station once again losing listeners year-on-year. After dropping from 66,000 (65%) in 2013 to 64,000 (64%) this time last year, they’ve lost even more listeners in a year and now sit on 59,000 (60%).

Of the top programmes in the country, the entire top 15 are aired on RTÉ Radio 1. The main change is that, while Morning Ireland is still quite strongly the most listened to programme in Ireland (despite dropping 5,000 to 433,000 in 12 months), Joe Duffy’s Liveline is no longer in second place, having lost 18,000 listeners since last year, dropping to 369,000.

Today FM’s Ian Dempsey Breakfast Show has dropped 7% of it’s listeners year-on-year, going from 196,000 to 183,000. However this makes it still the most listened-to breakfast show in the country, apart from Morning Ireland. On the same station, Matt Cooper’s weekday edition of The Last Word has lost 14,000 listeners, dropping to 141,000, while the weekend edition of the show actually saw an increase – climbing by 19,000 to 138,000. Phil Cawley’s Saturday show meanwhile saw a 20,000 listener jump in the past year, and now has 153,000 listeners.