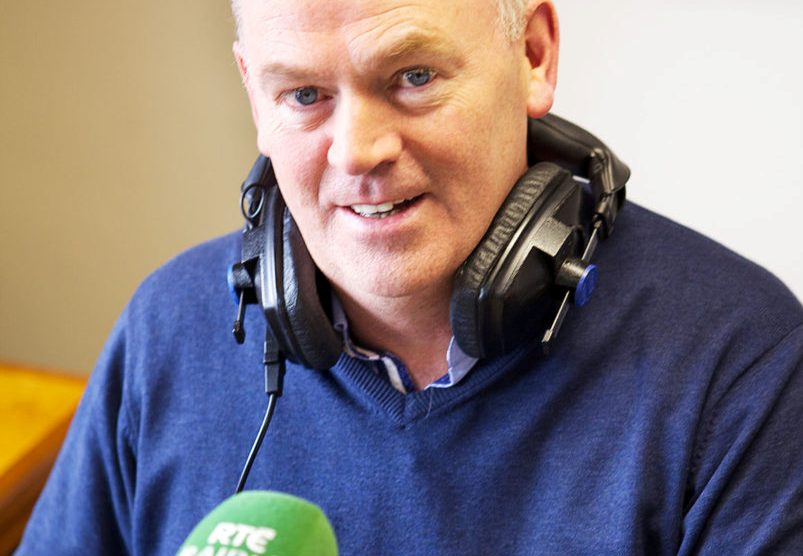 Séamus was from An Ardaí Bheag in Gort an Choirce in the Donegal Gaeltacht and had been working with Raidió na Gaeltachta since 1988, and as manager of its northwest service, based in the Doirí Beaga studio, since 2004.

He was passionate about Gaelic football, and was a highly respected commentator on Gaelic Games. He was appointed by Aogán Ó Fearghail, Uachtarán GAA, to the GAA Irish Language Committee a few years ago, and Aogán paid tribute to him on a special programme on RnaG this morning. He was described in that programme as ‘the Donegal voice of Gaelic Games commentary’.

Only last Saturday he was commentating on the replay of the semi final between Donegal and Monaghan in Cavan, and he travelled to Bordeaux a few weeks ago to commentate on the Ireland V Belgium match in the European Football Championship.

Séamus was very involved in the community, and was the Secretary of the Gort an Choirce Committee for many years.

He is survived by his wife Dolores, their three children Dónal, Éadaoin and Póilín, a brother and sister, relatives and friends.

Edel Ní Chuireáin, Ceannaire RTÉ Raidió na Gaeltachta said: “It is with great great sadness that we learned of the death of Séamus Mac Géidigh. He was a man amongst men – a mentor and champion of his staff here in Doirí Beaga, a community leader, a talented broadcaster, a gifted commentator, a family man and a friend to us all here. This service will be all the poorer for his loss, as will the community in Donegal. He will be sadly and greatly missed. May he rest in peace. We extend our sincere condolences to his wife Dolores, to his children Éadaoin, Dónal and Póilín, and to his relatives and friends.”

Jim Jennings, MD, RTÉ Radio said: “The sudden death of Séamus Mac Géidigh is a huge loss to RTÉ Radio and in particular to Raidió na Gaeltachta. My heart goes out to his family at this very sad time. Our thoughts are with you.”

Kevin Bakhurst, Acting Director General, RTÉ said: “I’m deeply saddened to hear the news of Séamus’ death. He was a highly respected journalist and broadcaster and will be greatly missed by colleagues across the organisation. My thoughts and condolences are with his family and friends at this time.”