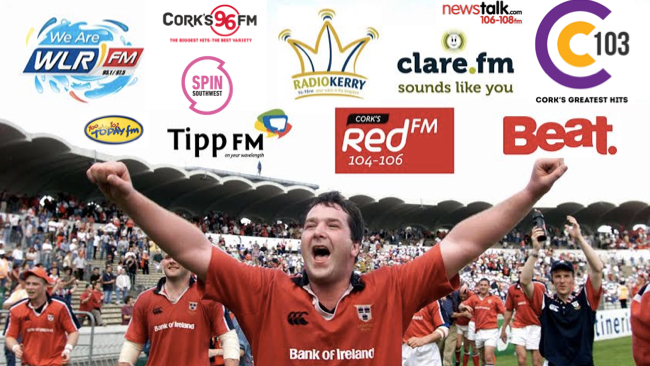 Independent radio stations throughout Munster will come together tomorrow to pay tribute to the late Anthony Foley, Head Coach of Munster Rugby.

Each of the ten Munster based local and regional radio stations will play “The Fields of Athenry” at 12 noon, to coincide with the beginning of the funeral mass.

Kieran McGeary, CEO of Cork’s 96FM & C103 said: “For many years Anthony Foley has been a regular and recognisable voice on our radio stations. We commentated on games he was involved in, interviewed him as both player and manager and charted the highs and lows of his career on the airwaves”.

The esteem that Anthony Foley was held in, in the world of sport and also by the general public is evident in the outpouring of tributes paid to him. Radio stations have been flooded
with messages, stories and phone calls since last Sunday afternoon.

In paying its own tribute, radio stations will give listeners the chance to gather together, pause for a moment and be part of a Munster wide tribute to Anthony Foley.

We send our condolences to Anthony’s family, to his rugby family and his many thousands of fans.