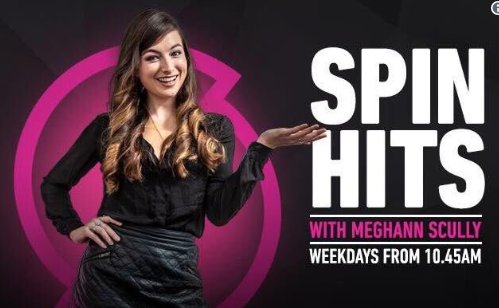 SPIN South West has announced that Meghann Scully is the new presenter of the station’s SPIN Hits weekday show from 10.45am till 2.45pm.

Features on the show include 10 SPIN Hits in a Row every hour along with all things entertainment, sport and trending content.

Meghann joined SPIN South West in May 2016 as Fully Charged Co-Presenter and has a Masters in Journalism from NUIG and previous work with brands such as MTV.

Describing herself as a Galway Girl and a Limerick Lady, Meghann is well known by the South West audience. This year, she was featured as one of Limerick’s Top 40 Under 40, she writes a weekly column entitled The Meghann Mix in the Limerick Leader and she recently released her first book entitled Broken Love.

Commenting on the appointment, Station Manager at SPIN South West, Nessa McGann told RadioToday: “Meghann has worked in SPIN South West since May 2016 and in that time has built a loyal listenership base. This was her first job in Radio and we in SPIN South West are delighted that she is taking the next step and moving from co-hosting a show to presenting her own programme. Meghann has bundles of energy and we’re confident that her SPIN Hits show will give our listeners a healthy dose of positivity to help get them through their day!”.

The day is here…

It's SPIN Hits with @Meghann_Scully

Got a request then get in touch on 0877102103#SPINHitswithMeghann pic.twitter.com/o3IAYt73hI