Ed Roche presents his unique tale of coming out 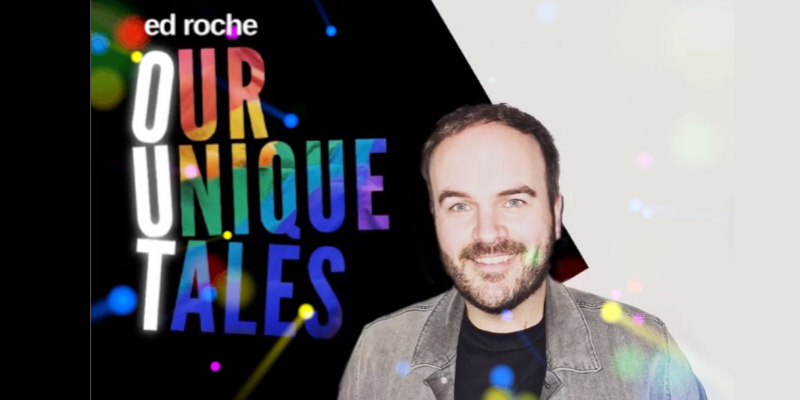 Presenter Ed Roache has created a radio documentary series for SPIN 1038 and SPIN South West to mark the month of PRIDE.

Ed ‘came out’ two years ago and now he’s talking out his experience in ‘Ed Roche – Our Unique Tales’ – coming out once again to a whole new audience.

Speaking on the title of the series Ed Roche said “the reason I chose the name ‘Our Unique Tales’ is because everyone’s story is so unique.

“There is no one way of coming out.

“I also like the word ‘our’ – it’s very inclusive – just like this series. Also, the first letter of every word spells the words OUT. I thought it was a subtle way of including a word that means so much to me and many other LGBTQIA+ people.”

Ed also gives us a little glimpse of what people can expect about the series: ‘Our Unique Tales’ is a series about LGBTQIA+ people in this country, it’s a story on their lives, from the difficulties they faced growing up in this country, to where they are today. A lot of tears were shed when making this series, I just really hope it connects with people no matter what your sexuality is. People shouldn’t assume this is just for the gay community, it’s probably the opposite honestly”.

The series will feature some incredible LGBTQIA+ figures, they are; Strongman Chris McNaghten who was Irelands first openly gay strongman. Rebecca Tallon De Havilland – she was the first person in Ireland to undergo gender reassignment surgery. Nikki Symmons – a former Irish international hockey player. And Philp Keogh who many people will know by his stage name Victoria Secret.

There is a special episode which will broadcast on Saturday May 22nd to celebrate six years since Ireland voted Yes in the Same-sex marriage referendum. The episode features Rory O’Neill aka. Queen of Ireland Panti Bliss. Rory was a massive campaigner in securing a yes vote for Ireland back in 2015. Has much changed since then? This series investigates.

The series is not necessarily about Eds own coming out experience, “I’ve never actually said I’m gay on the radio, I guess this series is a whole new coming out story for me. I’ve no doubt that some of my family, friends and listeners will only figure this out about me for the first time when they tune in! I am nervous about the reaction it will get! I just hope people are accepting to it, to me and to the LGBTQIA+ community.”

Ed Roche – Our Unique Tales first airs at 9am on Saturday morning – May 22nd on SPIN 1038 and SPIN South West.

There will then be a further 4 episode for PRIDE Month in June, every Saturday morning at 9am.