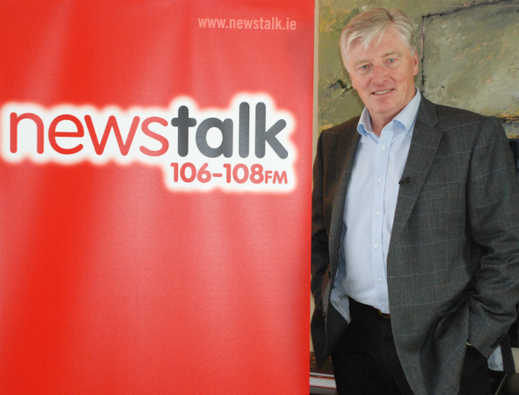 Long serving RTÉ television and radio presenter Pat Kenny is off to the independent sector, joining Newstalk for a daily radio show.

He’ll be on-air from 10am till 12:30pm each weekday from September 2nd, and brings an end to a 41 year career at the state broadcaster.

RTÉ paid tribute to the contribution Pat Kenny has made to public service broadcasting over many years.

Pat joined RTÉ as a part-time radio announcer in 1972. He quickly moved into broadcasting and later presented ‘Today Tonight’ winning a Jacob’s award in 1986 for his three radio programmes: ‘Saturday View’, ‘The Kenny Report’ and ‘The Outside Track’.

Following the 1988 ‘Eurovision Song Contest’, which he co-hosted with Michelle Rocca, he presented a number of chat shows, including ‘Kenny Live’. He took over as host for ‘The Late Late Show’ from Gay Byrne in 1999 which he continued to present for the following ten years. In 2009 he was announced as the presenter of current affairs debate programme ‘The Frontline’, moving in January 2013 as one of the presenting team of current affairs programme ‘Prime Time’.

He has been a presenter on RTÉ Radio 1 on his morning current affairs programme ‘Today with Pat Kenny’ since the 1980s, and has won multiple awards across his career.

Speaking of Pat Kenny’s departure, RTÉ Director General Noel Curran said: ‘Pat has made a huge contribution to RTÉ over many years on both television and radio. Always meticulously prepared, he is a broadcaster of real talent, range and integrity.

“I have worked with Pat as a Producer of both his Current Affairs and his Entertainment series and I know the range of his talent. Pat Kenny’s contract with RTÉ expired earlier this year and we have been aware for some time that he had an offer from commercial radio. Through lengthy negotiations every effort was made to retain Pat’s services but unfortunately we could not come to an agreement.

“I would like to wish Pat the very best for the future and I would like to thank him, both personally and as Director General for his contribution to broadcasting on RTÉ. We must all now look ahead to refreshing our Radio 1 Schedule, on the back of the very strong JNLR figures last week.”