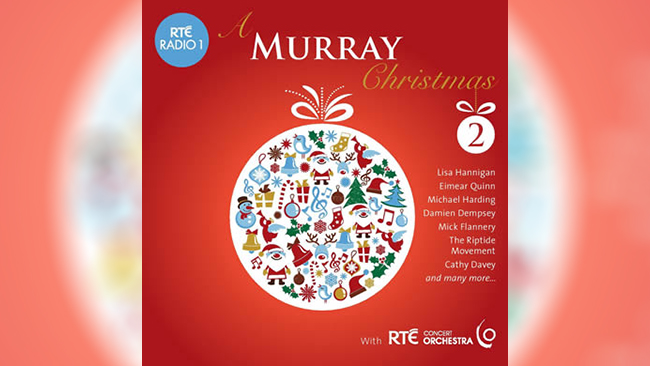 The original “A Murray Christmas” album – which went platinum when it was released in 2012 – featured performances from Sinead O’Connor, The Coronas, Lumiere, Declan O’Rourke, Jack L, Wallis Bird and Miss Paula Flynn, and raised funds for Irish depression charity, AWARE.

The album was launched today by broadcaster Bill O’Herlihy and a number of the featured guest artists at a special broadcast of the John Murray Show from Easons in Dundrum Town Centre. Easons will be stocking the album, as will the RTÉ Shop and Apple’s iTunes Store.

Dr. Claire Hayes, Clinical Director of AWARE said: “Aware is absolutely delighted that RTÉ’s John Murray Show has chosen Aware as the beneficiary of this lovely album for a second time. This project helps to shine a spotlight on the vital services that Aware provides and reminds us all of the power of words and music to help us feel connected. Sincere thanks is due to everyone who has helped to make this happen, including the artists and musicians who have so generously contributed their talent and their time.”

Presenter John Murray said: “I’m delighted to be involved in such a creative project with some of Ireland’s finest musical talent. This album is for a great cause too, Aware does amazing work for people with depression. There’s hardly a family in Ireland that hasn’t been touched by mental illness as I know only too well. It is so important for people and to have the support they need in tough times.”

Anthony Long, General Manager of the RTÉ Concert Orchestra, said: “The RTÉ Concert Orchestra plays everything from classical to jazz to rock to traditional, making it the ideal orchestra to feature on an album featuring such an exciting range of talent. It has been our pleasure to work with our colleagues in RTÉ Radio 1 to support Aware in its invaluable work.”