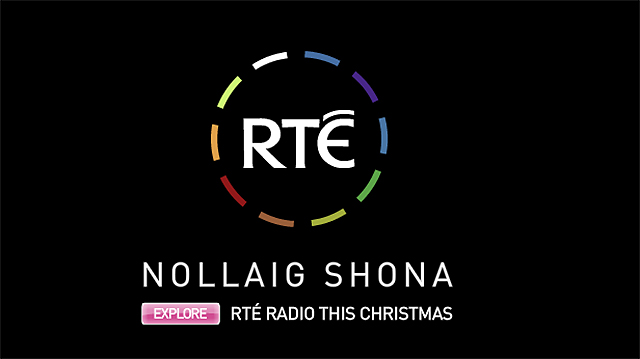 RTÉ have announced their Christmas radio schedule, calling it a “magical mix of radio programming that will really put listeners in a festive mood”.

Starting with RTÉ Radio 1, and the station will have a festive schedule full of arts, music and a little bit of magic for the holiday season.

Joe Duffy will be live on Grafton Street this Christmas Eve with a host of guests. Also appearing are the Mooney Tunes concert from the Bord Gáis Energy Theatre, In Concert with Gavin James, Joe Jackson’s first interview with Richard Harris and the return of annual favourite “Driving Home for Christmas with Maxi”. Cathal Murray wakes us up early with Santa and songs on Christmas morning and John Creedon will ring in the New Year.

Meanwhile in sport, RTÉ Radio 1 offers six hours of live sport on St. Stephens’ Day including racing from Leopardstown and Limerick and rugby from Thomond Park, as Munster host Leinster. On the 27th and 28th of December, RTÉ rRadio have more racing from Leopardstown and Limerick, while on New Year’s Day they have live rugby commentary for Connaught V Munster, and on the 3rd of January Leinster V Ulster.

“Fanning’s Fab 50” counts down listeners’ top 50 songs of all time ahead of the big day while “Not on the Effing Playlist” sees Rick O’Shea, Keith Walsh, Ciara King and Louise McSharry rip up the rulebook and play their favourite tracks.

The Best of Nicky & Jenny brings highlights from The Nicky Byrne Show throughtout the year whilst Stephen Byrne finds out what Santa brought for all the good boys and girls on Christmas morning.

On the easier listening side of things, RTÉ lyric fm presents an array of festive treats, including , on Christmas Eve, Paul Herriott presenting one of the greatest works in the secular choral repertoire, Handel’s Messiah, in a concert recorded at the Danish Radio Concert House in Copenhagen.

Christmas morning will see lyric fm fans waking up to Classical Kids as The Muppets join presenter Ian McGlynn for a song, and on St. Stephens’ Day, Brian Newhouse presents a special programme with the glorious voices of Chanticleer, the San Francisco-based men’s choir.

The schedules of RTÉ RnaG and the RTÉ Digital Radio stations will also be spiced up for the festive season.

More on RTÉ Radio’s Christmas lineup can be seen on their web site, here: http://www.rte.ie/radio/christmas/