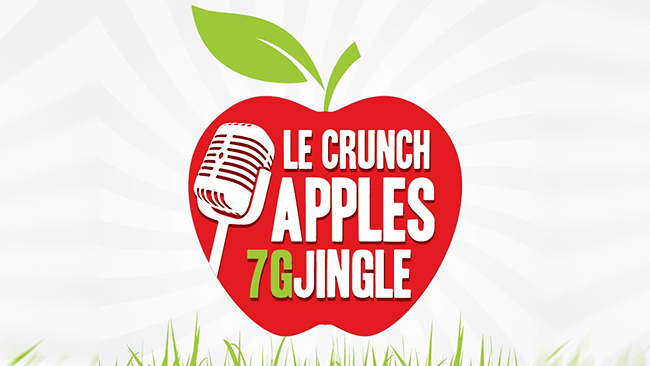 Le Crunch Apples are giving away €7,000 in a jingle competition in conjunction with national station Today FM.

Starting on the Dermot & Dave Show next Monday, listeners will have the chance to win the prize by writing a brand new radio jingle.

The winning jingle will be professionaly produced and aired following a national final on Today FM.

The competition begins on Monday February 23rd on The Dermot & Dave Show and over the following four weeks, some of the best entries will be used on air while the judges start a selection process that will see five lucky people reach the national final on Friday March 27th – two chosen by public vote and three chosen by Today FM’s panel of judges.

They will then be invited with guests to the national final where they will perform their jingle live on air, with the public vote opening on March 16th and closing at midnight Thursday March 20th.

The overall winner of the competition will walk away with €5000, while the four runner-ups will each receive €500.

Last year, the station and the fruit company came together to run the “Le Crunch Apple of My Eye Song Contest”, which ran on Dermot & Dave’s predecessor, the KC Show and awarded a prize of €8,000 to the band who performed “Ireland’s best cover version” – Flat Out from Ballina, Co. Mayo, who performed “Pumped Up Kicks” at the final.

For this year’s competition, Le Crunch are looking for radio jingles instead of songs and they say: “Think apples! Think 4-5 lines, snappy and fun! The jingle will have to feature the words ‘Le Crunch’ and ‘apple’. Our website will have the rules very soon and tune into Dermot & Dave next Monday on Today FM for more.”