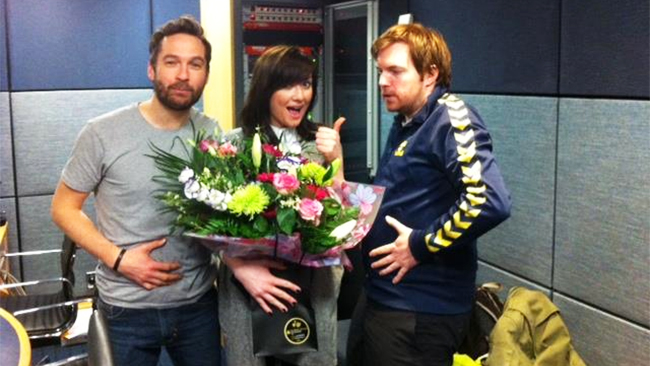 Jennifer Maguire, one of the hosts of RTÉ 2FM’s “Breakfast Republic” has temporarily left the show on maternity leave.

Maguire, who presents the show alongside Keith Walsh and fellow comedian Bernard O’Shea, was due to give birth this Monday, March 9th, but appeared on air as usual, surprising her co-hosts.

Walsh joked on air about the impending birth of her baby on Monday, saying “I wonder will she give birth live on air this morning… we can only hope!”, while Maguire herself admitted that – despite her due date – she didn’t plan on taking maternity leave until next week, adding “yeah, any minute now!”.

Jennifer Maguire married Lau Zamperelli last June and it’s thought that they are having a baby boy.

She was presented with a bunch of flowers by Walsh and O’Shea after their show this morning, with the above photograph posted to the station’s facebook page, captioned “Jennifer Maguire has left the building! Best of luick, Jen! We miss you already, come back soon! x”