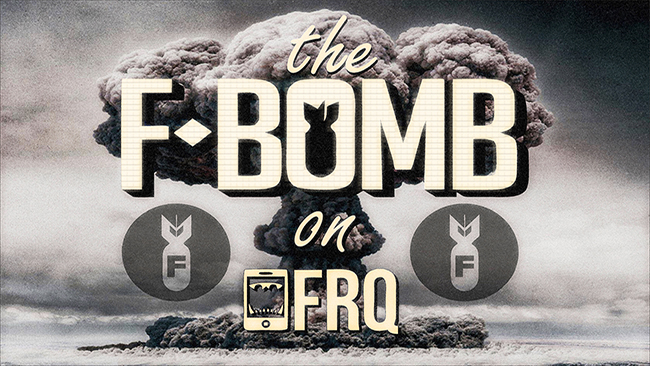 Hosted by Kim Buckley and Niall O’Keeffe, “The F-Bomb” – which officially launches this evening at 8pm – focuses on news stories that are of interest to FRQ’s younger (12-18) target audience as well as light-hearted talk topics and celebrity gossip.

Kim and Niall also expect to get to get a bit of debate going each week as they discuss the week’s top movies, debate the celebrity stories and argue over who is their “freak of the week” – and they’re looking for listeners to interact with them on twitter and facebook.

The 2-hour Wednesday evening programme will also feature Athlone-based psychotherapist & hypnotherapist Paul Gill, who will join Niall & Kim on the phone each week to take an analytical look at the issues of the day as well as tackling listeners’ problems and interpreting their dreams.

FRQ is Communicorp’s youth-driven training station which has, in recent times, kick-started the careers of many well known radio names. These include 16 year old Gavin Dowd who recently moved to FM104’s weekend schedule and Cormac Moore & Daniella Moyles, who started at FRQ, moved on to iRadio before coming back to the Malt House to Spin 1038, where they recently took over the breakfast show Fully Charged.

Station manager, Andy Clarke – who also presents with 98FM and East Coast told RadioToday: “I’m really happy with how FRQ is growing and evolving. Not only do we have a full 5-day a week breakfast show, we also have two fully mixed shows, tailored ‘news you can use’ segments, and a host of passionate presenters who know what our audience loves. The F-Bomb takes us in another new direction, with a focus on talk – which is exciting!”.

Speaking about the station’s format, Clarke added: “Since I came on board at the start of this year, we’ve made some subtle changes to the sound. We’re still focused on having brand new music first, just not so much on the guitar driven variety – and we’ve got a few classics thrown in too – although nothing too old! We’re one of the only stations of this type out there, and we’re promoting and progressing new talent 24/7”.

Andy Clarke says that anyone interested in contributing to the station should get in touch by email, adding: “It’s not only about the music though,- as a training and development station, we’re always looking for new talent, and I know there are plenty of commercial stations with their eyes – and ears! – on our talent.. as we’ve seen from recent moves! I’ve made sure there’s a wide range of skill-set improvement opportunities going for anyone who might be interested – not just being a music jock”.

FRQ can be heard online through their web stream or mobile apps, both of which are available via their site at frq.fm.