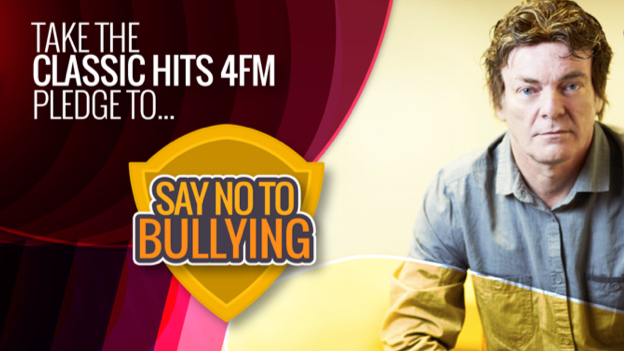 The Niall Boylan Show on Classic Hits 4FM wants listeners to get involved in a national week long campaign to Say No to Bullying in schools.

The campaign will run from March 7th – 11th and will feature experts in the fields of physical and cyber-bullying, mental health issues, body image and more.

The ISPCC will be on air to give their advice and coping mechanisms for people affected by bullying. The show will hear from students who have been victims of bullying and hear their stories. The show will also hear from past bullies themselves.

Niall will feature schools from around the country who are taking the pledge to ‘say no to bullying’.

“I was a victim of bullying myself and it had a devastating effect on me growing up,” said Niall. “I’m in a position now that I can help and I can’t just sit back and do nothing. Kids are suffering around the country and very little has been done about it! I want this project to go nationwide. I want it to force the government in to taking action and I want to prevent kids suffering the same as I did”.

Niall wants to encourage students and adults of all ages to take a pledge as follows:

“Stand up, Speak out, Stop

We will not join in any bullying behaviour; we will not use our hands, our voices or our computers to hurt another person. We are taking a stand against bullying.

Listeners will be encouraged to say that they have taken the pledge on social media.