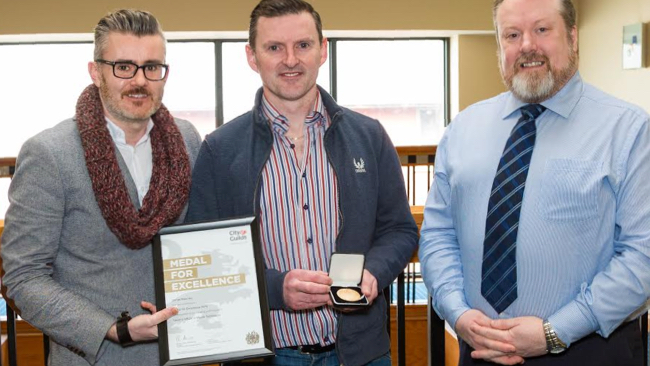 The Castleisland native has been awarded a City & Guilds Medal for his portfolio, which includes his documentary ‘Once Were Champions’ about Castleisland Desmonds’ winning the 1985 All-Ireland Senior Football Club Championship.

Dan says the skills he learned on Radio Kerry’s broadcasting course were invaluable.

Speaking about the documentary he said that it was a “labour of love” and that his passion for the subject matter made it relatively easy to gather the content.

Speaking about Dan’s achievement Shane O’Connor, acting manager of Radio Kerry Training, said that the win is amazing news for Dan and for Radio Kerry Training. He said that less than 100 medals were awarded from a pool of two million City & Guilds students worldwide. “There are 12,000 learners in Ireland and Dan is one of the few people who have a medal,” he added, “so it says lot for Dan and it says a lot for the course and the facilities provided.”

Owen O Donnell said that Kerry ETB is delighted with this achievement and very proud of Dan. Speaking to Jerry O Sullivan Mr O Donnell said that the Radio Kerry Training Media Techniques programme is one of the flagship courses for Kerry ETB. “It’s kind of spectacular the amount of achievement and awards this course gains” he added , “there were only 9 medals of excellence awarded in Ireland this year from City and Guilds so that puts it into context”.

Dan’s documentary ‘Once Were Champions’ will be broadcast at 10am on Radio Kerry on St Patrick’s Day.