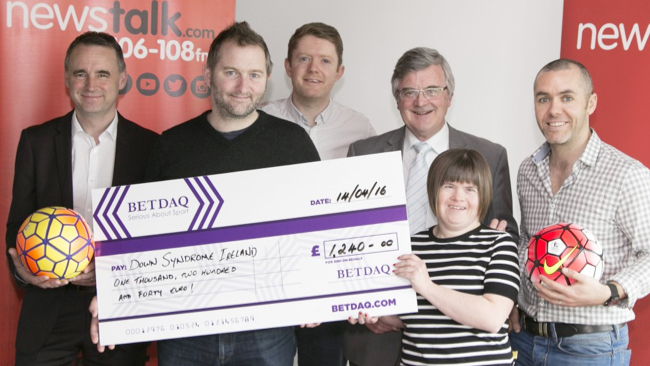 Newstalk’s Off The Ball team along with show sponsor BETDAQ have presented a cheque to Down Syndrome Ireland.

The team and their Premier League analyst Kevin Kilbane have used their football nous to earn some hard cash for a good cause.

Every Saturday, the football brains pit their wits against the market to predict football results and outcomes. The leading forecaster at the end of March was the 110 times capped former Ireland international player who has chosen to donate the team’s total winnings of €1,240 to Down Syndrome Ireland.

Commenting on his success Kevin Kilbane says: “Firstly a big thank you to BETDAQ for making it possible to help a charity so close to me, but most of all a big thank you for giving me the opportunity to show Ger, Nathan & Dave that they know nothing about football which is of course something I’ve been saying for a long time!”

Greg Walker P.R.O. with BETDAQ added; “BETDAQ are delighted to be able to support Down Syndrome Ireland on behalf of Kevin Kilbane and Off The Ball. This is a fantastic charity to support, one that does a huge amount of good work and we are thrilled that Kevin has chosen them. The whole Off the Ball team gave some great insight and tips every Saturday with €1,240 to show for their efforts.”