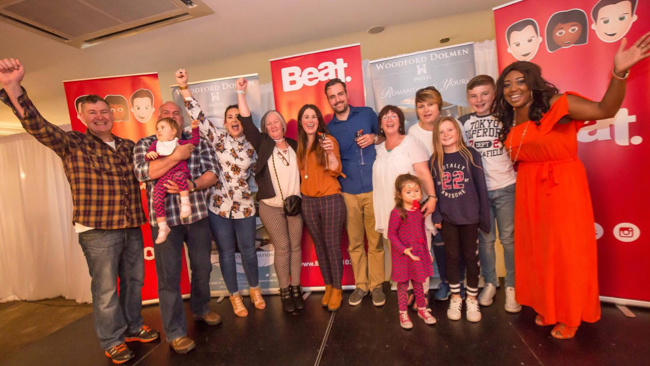 A County Wexford couple have won a dream wedding on Beat 102 103 after raising €13,000 for Temple Street Hospital.

Aimie O’Leary and Mario Covis secured the prize of a dreaming wedding after raising the money in a radio competition that saw five charities in the South East share in a fundraising total of in excess of €40,000.

The Big Reveal of the total amount of monies raised for their chosen charities was announced at a special live Beat 102-103 Outside Broadcast from the Woodford Dolmen hotel on Sunday October 2nd.

The radio competition received hundreds of applications from eager pre-newlyweds across the region & the Beat “Win Your Wedding” team had the tough task of narrowing the selection down to five lucky finalists. Beat set these remaining couples from Dungarvan, Wexford, Kilkenny, Waterford City and Carlow a challenge to raise as much money as they could for their chosen charities across the South East.

The remaining couples fundraised tirelessly across just six days. As part of their efforts to raise the most money to win the €15,000 wedding prize, the couples engaged in activities such as Spinathons, bake sales, car washes, auctions, table quizzes & charity raffles.

CEO of Beat 102-103 Gabrielle Cummins: “This was such a heart-warming competition for Beat to be a part of & we are delighted that over €40,000 has been raised in such a short space of time for five worthy charities across the South East. We very much enjoyed working alongside the Woodford Dolmen hotel for this dream prize & we would like to wish all the couples who took part in “Win Your Wedding” all the very best for the future .”