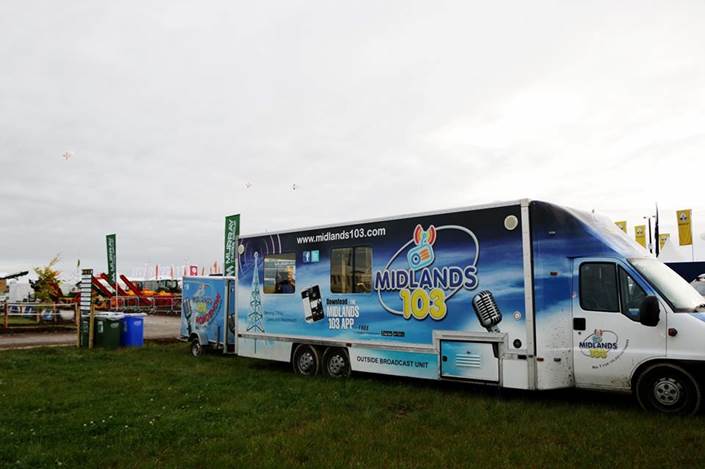 Midlands 103 is once again broadcasting live from Europe’s largest outdoor event, the National Ploughing Championships, with the vast majority of the station’s output coming from the event in Screggan, Tullamore this Tuesday, Wednesday and Thursday.

While other stations will be live at the ploughing for just a few shows each, all of Midlands 103’s main daytime shows will be coming live from their outside broadcast unit, located at Block 2, Row 5, Stand 133 on each of the 3 days of event.

The shows coming live from the Ploughing are: Breakfast with Ann-Marie Kelly at 6.30am, Midlands Today with Will Faulkner at 9am, The Afternoon Show with Carl James at mid-day, Drive Time with Roy Jennings at 3pm, as well as special Ploughing editions of specialist programmes “Taking Care of Business” with Ronan Berry & Albert Fitzgerald at 7pm on Tuesday and “Country Life” with M.J. Cleary at 7pm on Wednesday – which will feature an interview with Minister for Agriculture, Food & The Marine Michael Creed T.D.

This amounts to just under 40 hours of live programming on Midlands 103 across the 3 days of the event, which is taking place in the Tullamore-based station’s “back yard” for the second year running.

The coverage will include interviews with organisers and exhibitors, on-the-ground event updates, the latest ploughing traffic & travel updates, competitions & giveaways, and the presenters themselves taking part in some very special agricultural activities!

Midlands 103’s daily talk show Midlands Today won a Best Current Affairs Programme PPI Award in 2016 for their coverage of the Ploughing Championships, in a broadcast that included presenter Will Faulkner taking part in the fun activity of bovine artificial insemination live on air!

Midlands 103, which has studios in Tullamore, Athlone and Mullingar, covers the midlands counties of Laois, Offaly and Westmeath, and has seen considerable increases in audience numbers in recent times, having jumped from 100,000 to 112,000 weekly listeners year-on-year in the JNLR survey. (source: JNLR2017-2)