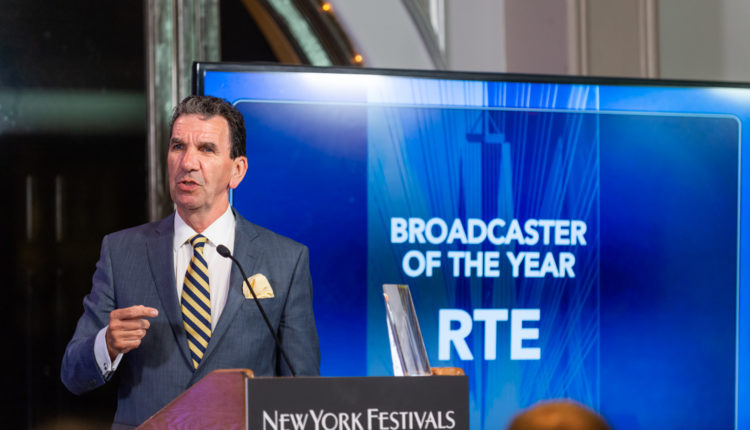 RTÉ has won the Radio Broadcaster of the Year award for the Fifth Time at the New York Festivals International Radio Awards.

In 2011, RTÉ radio services became the first Irish stations in the award ceremony’s 55-year history to be awarded the accolade of Broadcaster of the Year. The following year, in 2012, RTÉ brought home the top prize once again. After only a two-year hiatus, RTÉ won it again in 2015 and then again in 2017. This year the National Broadcaster wowed the judges and has been selected as the overall winner of this major international award for the fifth time in six years.

Outside of RTÉ, a Newstalk documentary on Ireland’s worst ever air disaster won two awards. Producer Eoin Brennan was celebrating the win with his team, which was made all the more poignant, as his grandfather was one of the passengers who tragically lost their lives in the plane crash. The documentary won the gold award in the history category and silver in the best mini-series category.

Speaking from New York, Eoin expressed his delight on receiving the award. “I’m thrilled to receive these awards for a programme that was so personal for me and important to my family. I hope this will allow the story of Tuskar Rock remains in the minds of the public and ensures the memories of the victims continue to be remembered. I’m dedicating the award to my grandfather.”

Commenting on the announcement, Chris Doyle from Newstalk said: “We are delighted ‘After Tuskar Rock’ has won this prestigious international award and Eoin has received recognition for his outstanding work. Eoin’s crafting of the story and his personal connection to the tragedy really resonated with our listeners and this was evident from the levels of engagement the station received following its broadcast.”

Also in the independent sector, Silver awards went to Rachael Ryan for a documentary on SPIN 1038 and It was Fifty Years Ago Today – Paul McLoone on Today FM, whilst a Bronze award went to Clare FM for its Top of the World story.

In addition to being named Broadcaster of the Year, RTÉ also received a total of 41 awards in the radio categories, including 24 medals at the 2018 New York Festivals for individual programmes on RTÉ Radio 1 and RTÉ lyric fm. The awards include eight for RTÉ Radio 1’s Documentary on One; seven for Drama on One; – including an award focusing on work by Mary Raferty on the Libyan Survival – Refugees Rescued from the Sea.

An award for Best Talk/Interview Special for RTÉ Radio 1’s ‘Sunday with Miram’ her programme ‘The Kinsmill Massacre: A Survivor’s Story.

RTÉ Radio 1’s Drama on One won four Gold Awards while Doc on One won three at this year’s festival. Drama on One on their Gold medals for the Best Writing, Best Performance by an Artist, Best Narration and Best Director. Doc on One’s winning categories consisted of Best for “Health/Medical, Human Relations and Biography/Profiles.

Jim Jennings, Managing Director of RTÉ Radio, says: “I am delighted RTÉ has been named New York Festivals’ Radio Broadcaster of the Year in the three times in the past four past years. The competition internationally is exceptional and they are experts their fields which makes this achievement a great honour for everyone in RTÉ. This is extremely important to us as a public service broadcaster. This coveted international prize shows that RTÉ Radio is a serious player on the world media stage. Across the board, from the acclaimed Documentary on One and Drama on One, to our Factual, Arts, Music and Entertainment programs and Lyric fm, our production teams have demonstrated their capacity to compete and win against some of the largest and best of the world’s broadcasters.”

Rose Anderson, VP & Executive Director of New York Festivals International Radio Awards, says: “New York Festivals is proud to celebrate the outstanding achievements of RTE. Once again, their creative teams have demonstrated a mastery of the art and craft of radio. This achievement at the highest level acknowledges a depth of subject matter and storytelling ability along with technical innovation and has captured the attention and respect of their listeners and the New York Festivals International Radio Awards Grand Jury. Congratulations on another brilliant year!”

Head of RTÉ Radio 1, Tom McGuire, says: “This success at The New York Festivals is a wonderful tribute to programme makers in Irish radio when bench-marked internationally. The ‘Broadcaster of the Year’ allocate for RTÉ radio reflects the commitment to creative and innovative production in all our schedules.”

RTÉ lyric fm collected one gold, two silver and two bronze awards along with five certificates. The gold award was received for Vocal Chords in Conversation with Peggy Seeger. As It Lives & Breathes’ and for Biography/Profiles for the programme, ‘Vocal Chords: Paul Brady and Iarla Ó Lionáird in Conversation’.

Head of RTÉ lyric fm, Aodán Ó Dubhghaill, says: “I am Delighted once again that the breath of Lyric’s output is being recognised on the international stage. Programmes on culture, the environment, music, special events, sound art, religion and the arts are all being rewarded. Our dedicated team in Limerick, Dublin, Cork and Belfast deserve this great recognition for their work.”

See all the winners from Ireland here.