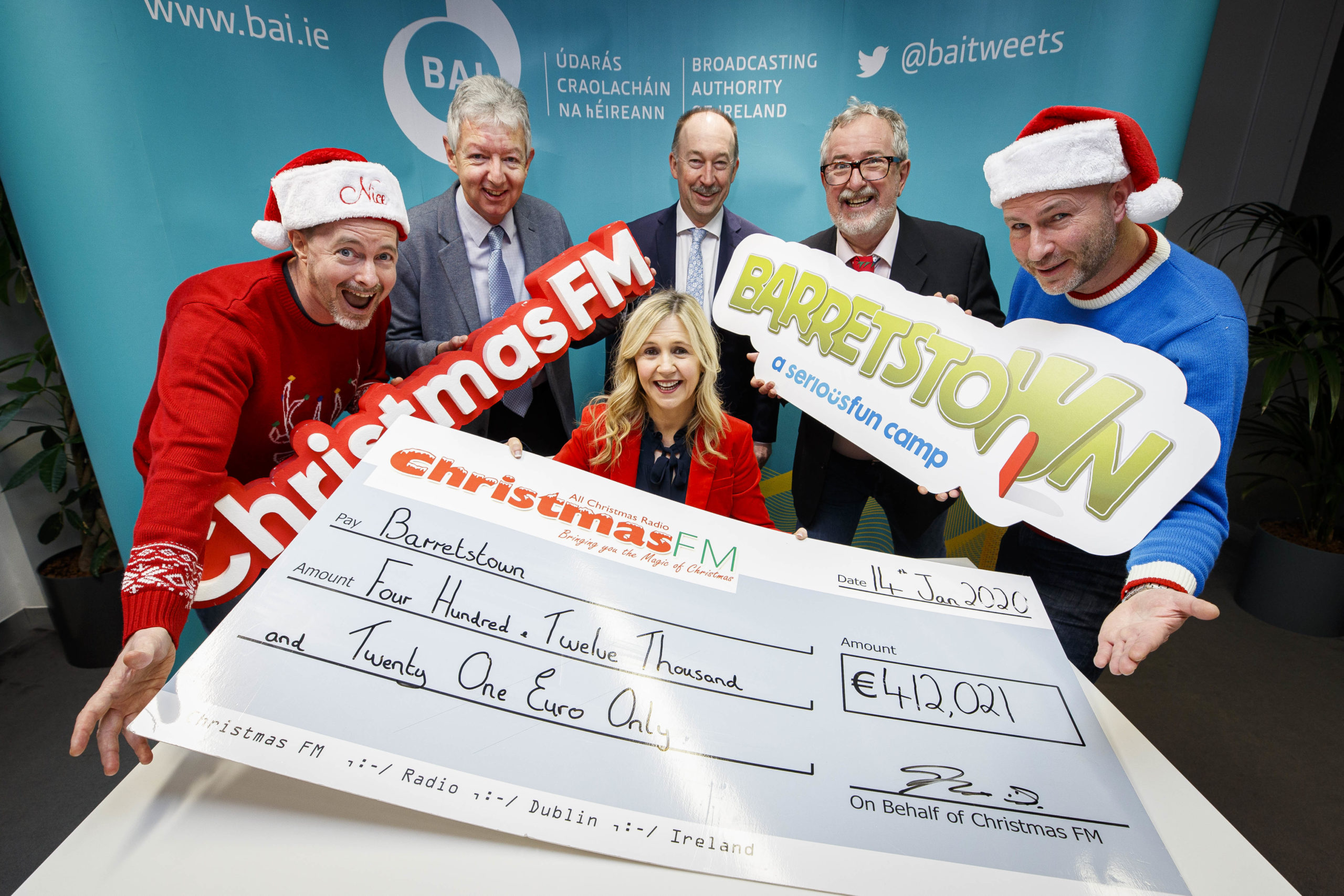 The original goal to raise funds of €250,000 would have allowed Barretstown to ‘press play’ on over 850 days of life-changing programmes for seriously ill children.

However due to tremendous support, Christmas FM has surpassed targets and can now ‘press play’ on over 1,400 days at Barretstown Castle in Co. Kildare. Through these specially-designed camps and programmes, Barretstown brings back the fun of childhood by helping children affected by serious illness to ‘press play’ on childhood again.

The services provided to all of the children and families who attend Barretstown are entirely free of charge, so donations and fundraising efforts are vital for the charity to help more children to experience the magic of Barretstown each year.

The 2019 fundraising figure brings to over €2.25 million the total amount of funds the radio station has raised for a range of charities since its inception in 2008. The costs of running Christmas FM are covered by various sponsors, ensuring that all on-air fundraising and donations go directly to the charity partner.

The station is run each year by the team and more than 100 volunteers on-air, who devote hundreds of hours of their time.

Paul Shepherd, Co-founder of Christmas FM, says: “We are delighted to have raised €412,021 with the success of this year’s fundraising campaign. We would like to thank all of our loyal listeners who tuned in and donated so generously to Barretstown this year. We’re also thankful to the Broadcasting Authority of Ireland for granting us the license to broadcast and our premier FM sponsors for the year – Cadbury, Coca-Cola and An Post.

“We would also like to thank the Ballsbridge Hotel who have, once again, provided us with a home for our radio studio. We are also so grateful to the team as well as the volunteers who help make Christmas FM happen by assisting with the day to day running of the station.”

Dee Ahearn, CEO, Barretstown says: “This is a fantastic achievement and we are overwhelmed by the generosity and support shown to Barretstown by individuals, businesses and communities across the country over the course of the campaign. I would like to thank the team in Christmas FM for choosing us to be part of this very special campaign. Special thanks also to the Christmas FM volunteers who worked tirelessly to surpass our target and I’d like to acknowledge our Barretstown campers and families who shared their stories so eloquently throughout the whole campaign.”

The Broadcasting Authority of Ireland (BAI) grants Christmas FM a 30-day temporary sound broadcasting license, which enables the station to broadcast on a range of frequencies throughout the country.

Michael O’Keeffe, Chief Executive, the Broadcasting Authority of Ireland, says: “Radio is a powerful medium, which continues to bring people together throughout the country, and this can very clearly be seen through the fundraising efforts of Christmas FM. On behalf of the BAI, I would like to congratulate the station’s volunteers and listeners for another great fundraising drive, this year for the children who attend Barretstown, and their families.”

This year, Christmas FM was generously sponsored by the premier FM sponsors Cadbury, Coca-Cola and An Post. Christmas FM was broadcast from the Ballsbridge Hotel, Dublin who kindly gave the space for free.