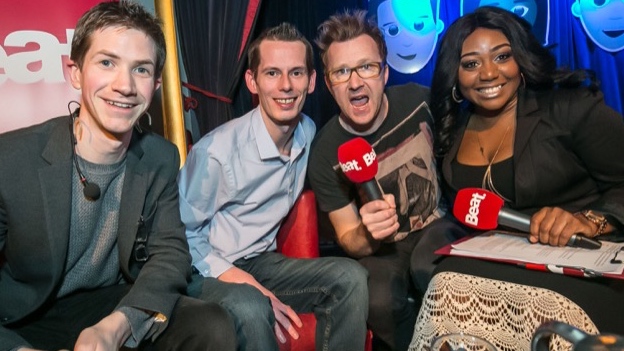 Niall and Vinny were surprised by comedian Jason Byrne on stage who told them they have a trip to Edinburgh from their bosses.

The free weekend, which was also for co-presenter Trish Archer and The Takeover presenter Emma Nolan, was made possible by Beat management as a celebration of the show’s 10th anniversary.

Beat CEO Gabrielle Cummins says: “There aren’t many radio presenters in Ireland who have survived a decade of continuous service on breakfast radio. It is such a competitive market that many burn out or simply move on elsewhere but this dynamic presenting duo has been putting smiles on listeners faces all across the region consistently so we thought it was about time it was their turn to feel the love.

“We’re delighted Aer Lingus Regional came on board and helped us pull off this great surprise.”

The station threw an exclusive birthday party for over 100 of their listeners and broadcast the party live from The Set Theatre Kilkenny early on Friday morning where the announcement was made to Niall and Vinny.

Niall and Vinny were also surprised with a ‘Best of Beat Breakfast’ video that captured some of the highs of the past decade. The video included well wishes from artists The Coronas and Hozier.